Mustafa al-Kadhimi was picked to try to set up a viable government, the third such nominee in rapid succession. Iraq faces economic and political instability, amid plummeting oil prices and the coronavirus pandemic. 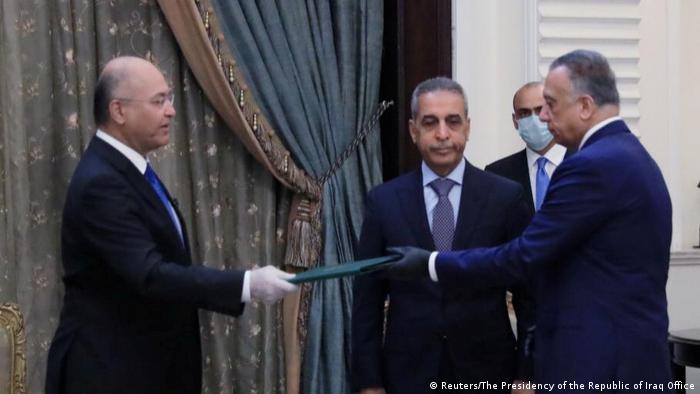 The head of Iraq's National Intelligence Service (NIS), Mustafa al-Kadhimi, was tapped on Thursday to be prime-minister designate,as the country cycles through potential leaders at a politically unstable time.

Zurfi citied "internal and external reasons" for his decision to withdraw. "My decision not to proceed with my nomination is to preserve Iraq and its greatest interests," he said.

Al-Kadhimi becomes the third leader to be nominated as the prime minister deisgnate in just 10 weeks.

"I will work tirelessly to present Iraqis with a program and cabinet that will work to serve them, protect their rights and take Iraq towards a prosperous future," al-Kadhimi wrote on Twitter.

Read more:  US and Iran: Decades of enmity

Al-Kadhimi was an opposition journalist in exile during the tenure repressive ex-dictator Saddam Hussein. Following the US-led invasion of 2003, he returned home to help launch the Iraqi Media Network and work as a human rights advocate.

In 2016, he was handpicked by then prime minister Haider al-Abadi to be Iraq's intelligence chief, at the height of the war against the Islamic State.

Al-Kadhimi is considered a pragmatist, with close ties to the US, Saudi Arabia and Tehran. He is seen as someone who might be equipped to manage the challenging relationship with Iran.

Currently, Iraqi prime minister Adel Abdul Mahdi is still at the helm on a caretaker role, despite having resigned in November, under pressure from an anti-government protest movement.

Iraq has struggled politically in the recent months and faces economic ruin, following decades of war, sanctions, political corruption and social unrest. Now, the country is also grappling with the coronavirus pandemic.

The recent plummeting of the price of oil has upended Iraq's budget, which is based on oil prices nearly twice their current value. But until the country has a functioning sitting government, it will not be able to tackle the budget issue.

The nomination of Adnan al-Zurfi, a little-known political figure, came as Iraq seeks to overcome months of unrest and renewed rocket attacks. He vowed to prepare elections in a year if approved. (18.03.2020)