Long one of the world’s most despised and feared leaders, Iraqi dictator Saddam Hussein rose from humble peasant beginnings to become a political gangster, ruthlessly dispatching any challenge to his power. 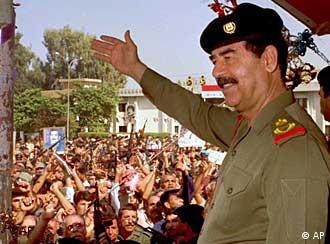 Since coming to power in 1979, his rule has been characterized by an oppressive cult of personality and exceptional violence. Over the past quarter century, Hussein has attacked his neighbors, used poison gas on his own people and even executed members of his immediate family.

Despite his brutality, he has long been admired in parts of the Arab world for consistently standing up to the West and for supporting the Palestinians in their struggle against Israel.

Ruling by fear, the 65 year-old Hussein is said to live in a bizarrely paranoid world. Besides having a number of body doubles, he is thought to never sleep in the same place twice. High-level Iraqi defectors have said his advisors are afraid to tell him anything except what he wants to hear lest they be killed. Despite currently facing the overwhelming force of the United Stated military, Hussein remains defiant and has called for a “holy war” to beat back an “American-Zionist” alliance. “We shall win with Allah’s help,” he said in a television address only hours after Baghdad was bombarded by U.S. missiles on March 20.

Though Hussein has often invoked Islamic imagery in the past to rally the support of the his citizens and the rest of the Muslim world, his religious verve is considered to be largely cynical in nature. Besides his thirst for power, he is known to have a penchant for whiskey, Cuban cigars and blond women.

Born in a village outside the northern town of Tikrit, Hussein showed early on he was unafraid to climb over corpses to achieve his aims. After joining the Arab nationalist Ba’ath party in college he became involved in a plot to kill Iraqi Prime Minister Abdel-Karim Qassem in 1958 and he was forced to flee the country.

When the Ba’ath party took power in a 1968 coup, Hussein took a position on the ruling Revolutionary Command Council and began his swift political ascent. For several years he served as the right-hand man of Iraqi President Ahmend Hassan Bakr and in 1979 he eventually assumed the presidency himself. Shortly thereafter he began efficiently to eliminate any threat to his rule.

After consolidating his power with a number of executions, Hussein promptly attacked Iran in 1980 with tacit U.S. support. The eight-year war claimed hundreds of thousands of lives on both sides and Hussein even used poison gas against Iranian soldiers. Not long after, Hussein used gas against his own people to put down a Kurdish uprising in the north of Iraq. 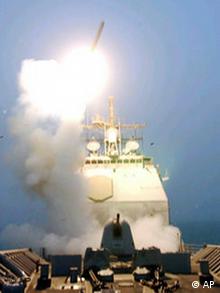 Hussein’s current conflict with the United States can be traced back to Iraq’s 1990 invasion of Kuwait. After being expelled from the oil-rich emirate by force, Iraq was put under a punishing regime of sanctions by United Nations. But Hussein was able to hang on to power and U.S. officials said he never gave up his ambition of developing weapons of mass destruction.

The U.S. and its allies warn that in time Hussein would have few qualms to use chemical or biological weapons again. “This regime is the complete embodiment of ruthlessness, with little regard for human life,” said U.K. Defense Minister Geoff Hoon.

Iraq denies it has any such weapons and United Nations weapon inspectors say there is no conclusive proof supporting American claims. But willing to risk the uncertainties and legal ambiguities of a pre-emptive war, U.S. President George W. Bush has embarked on a military campaign aimed at finally ending Hussein’s long and vicious reign.

War Begins With a Burst of Missile Fire

The U.S. and British-led military campaign begins against Iraq in the early hours of Thursday morning; Iraq responds with a counterstrike. (March 20, 2003)

In a televised address to the American people on Monday evening, President George W. Bush issued Saddam Hussein an ultimatum: leave the country in 48 hours or face war. (March 18, 2003)