′Problem is not interrogation, it′s war itself′ | World| Breaking news and perspectives from around the globe | DW | 28.04.2014

US investigative journalist Seymour Hersh disclosed the torture scandal of Abu Ghraib 10 years ago. But as he told DW, he is convinced that the US hasn't learned any lessons from it. 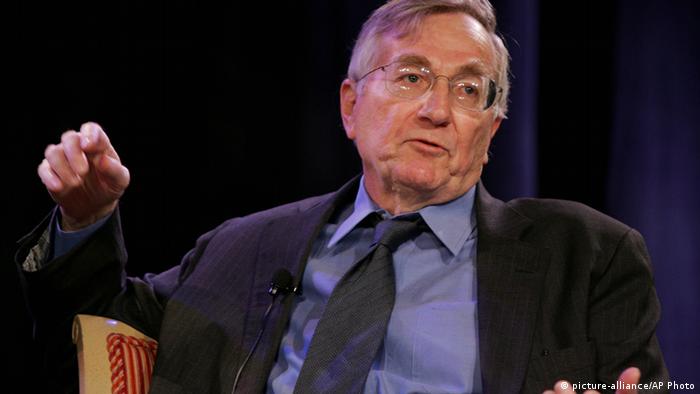 His voice trembles a bit, now and then he laughs in an attempt to cover up his insecurity. Seymour Hersh is still shocked at the atrocities committed in the Iraqi prison of Abu Ghraib, made public in photographs 10 years ago: Iraqi prisoners, naked, sexually humiliated, hauled along on dog leashes. And next to them, American soldiers, laughing. The award-winning journalist is tired of talking about Abu Ghraib, but for DW, he would make an exception, he said. He was the first to describe in detail what was happening in Abu Ghraib, quoting from the Taguba Report, a secret, internal investigation by the US army about atrocities committed against the prisoners.The report carries the name of Major General Antonio Taguba who was in charge of the investigation.

DW: Were you surprised by the torture scandal?

Seymour Hersh: Actually no… Amnesty International and Human Rights Watch have been reporting about the problems in prisons inside Iraq for months and months…The question is how to prove it in such a way that it can be reported. The major newspapers were basically ignoring the reports … Unless you have a document, it's very hard, inside America anyway, to get the mainstream newspapers to pay attention to something. They won't take Amnesty International's report or Human Rights Watch - they need evidence.

How did you manage to get access to evidence?

I was able to get a copy of a report done by a very wonderful major general in the army (Antonio Taguba), a very honorable man who lost his career, of course, over this. But he reported the truth.

For decades, you have been dealing with war crimes. Have the US army and the Obama administration learned a lesson from Abu Ghraib? Have things been improved, for example by applying stricter control mechanisms?

It's not a question of improvements in the chain of command… So no, I think all the talking about it doesn't really change the reality. There's been thousands of years of very bloody, brutal war. The only way…to get rid of these kinds of abuses is to get rid of war - and that doesn't look like it's happening.

You really believe the US hasn't learned anything at all from Abu Ghraib?

The whole concept of war leads to these kinds of abuses, especially in a guerilla war, where you fight an enemy that does not wear uniforms. You don't fight for the flag of your country, you fight for your body, your pals, you go to fight because they are going to fight, you want to protect them. People talk about love and combat, and that's what it's all about. So when your friends get killed or injured, you want to pay back - no matter how many rules and regulations. You don't necessarily pay back by getting the people who killed them, but you get whomever you can get. That's just the nature of war. Period.

It happens in all wars - not the nakedness and the sexually suggestive stuff, that seems to be extraordinary. But abuses? Abuses always happen in war. War is full of war crime…I was in the army. One of the things you are trained to do is to dehumanize people, to view the people you fight as subhuman.

You really haven't noticed any change, not even under President Barack Obama?

He is more informed (than former President George W. Bush), his domestic programs are in general quite good…But in foreign policy there's not a significant change, no…America would be much better off, if, 30 years ago, we had let Russia continue its war in Afghanistan…The mistake was made by the Carter administration which was trying to stop the Russians from their invasion of Afghanistan. We'd be better off had we let the Russians beat the Taliban. Obama is continuing many of the policies, the war against terrorism...I don't understand why we use drones to kill people when we know that this makes more enemies of us, and we also know that the real problem with many of the jihadists is a lack of jobs, a lack of food, a lack of a real life. And instead of dealing with these problems, we fight. That always seems to me very silly. We're not dealing with the underlying problems that create jihadists.

The US came under fire following the torture scandal of Abu Ghraib 10 years ago. Are the Americans still interested in these events nowadays?

That's over. The young kids - they don't remember. They don't know about Vietnam, and they probably don't remember very much about the Iraq war. That's inevitable - life goes on… Yes, there'll be stories about Abu Ghraib. But lessons learned? Not many.

There is a lot of hype surrounding the CIA torture report consisting of 6,000 pages, which President Obama is expected to present to the public soon. According to the report, the army is making use of torture and illegal methods to extract information. Will this publication bring about a change?

I doubt it seriously. It's going to be useful in the sense that it will focus public attention…and there has been controversy here in Washington about the fact that the CIA was apparently getting access to the computers of the members of the congressional committee that was doing the paper… But I am not optimistic that it will make a change in the American philosophy of war.

Will the report at least stir up a public debate within the US government about torture?

In the short run, there will be a lot of moaning and groaning about it, and Congress will talk about how bad it is. But I don't think it will change the prosecutions, I don't think it's going to lead to a big rethinking of how we do things. I've been around long enough to know that it's impossible to change the nature of war…We'll still have many CIA people saying "No, no, no, that wasn't torture, we weren't doing torture." We'll still define torture the way we want to define it.

Only recently, The New York Times reported that the Iraqi government had closed down Abu Ghraib. Do we now, 10 years after the events there, have full knowledge about what happened there?

No, the one thing we don't know is: Were the tactics that were used in Abu Ghraib known to the generals? At least some of the American generals visited Abu Ghraib. But were they told about what was going on? That's a great issue I have never been able to fully resolve.

Seymour Hersh, winner of the Pulitzer Prize, is an acclaimed American investigative journalist. During the Vietnam war in 1969, he disclosed war crimes committed by the US army. Ten years ago, his report about the torture scandal in the Iraqi prison of Abu Ghraib sent shock waves around the world. The author of several books continues to disclose war crimes even at the age of 77.

The US military is expanding secretive Special Forces at an ever faster rate. Few know the exact reach of these Special Ops, but there are thought to be 11,000 officers on active missions in 80 countries at any one time. (22.01.2014)

The CIA's "enhanced interrogation techniques," introduced after 9/11, were not just cruel, but rarely led to valuable intelligence, a report by the US Senate is likely to say. A summary is expected to be declassified. (04.04.2014)