Tensions between pro-Trump demonstrators and counter protesters descended into violence, with reports of at least 4 people being stabbed. 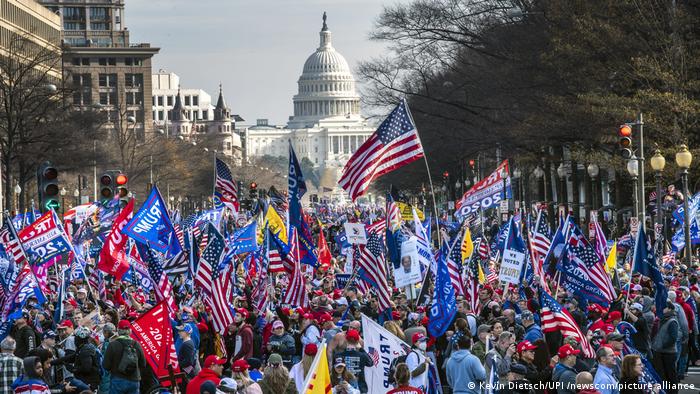 A rally of pro-Trump demonstrators descended into violence in the late hours of Saturday, as members the Proud Boys group clashed with Antifa counter protesters.

Protesters marched in support of outgoing President Donald Trump's baseless claims that the election was rigged, and that Democrat Joe Biden wrongfully won the election.

The rallies, where few people wore masks, were organized by Stop The Steal, linked to Roger Stone, an ally of the outgoing president.

Trump celebrated the protest on Twitter, saying: "Wow! Thousands of people forming in Washington (D.C.) for Stop the Steal. Didn’t know about this, but I’ll be seeing them!"

During the early hours, the president's motorcade drove by the protesters. The Marine One helicopter carrying Trump to the Army-Navy football game passed over a rally at the National Mall in the afternoon, and was met with cheers from the crowds.

Organizers and church groups urged supporters to participate in "Jericho marches" and prayer meetings. Protests were also planned in states where Trump's campaign has challenged the election outcome, such as Georgia, Pennsylvania, Michigan, Wisconsin, Nevada and Arizona.

All of Trump's campaign claims of election fraud have been rejected by state and federal courts. The Electoral College is scheduled to meet on Monday, to formally elect Biden as the president.

"My charge to you is to go back to where you are from and make demands. The US Constitution is "not about collective liberty it is about individual liberties, and they designed it that way," Mike Flynn, Trump's former national security adviser told the crowds.

Saturday's rallies drew a large number of "Proud Boys," a neo-fascist group. As the rallies ended, there were some tensions in downtown Washington among Proud Boys and Antifa activists. There was heavy police presence, with some in riot gear.

Around 200 Proud Boys gathered after the rallies, dressed in the group's colors of black and yellow, with ballistic vests and helmets.

The two groups shouted insults at each other from across the streets, and some set off fireworks, but were kept apart by the authorities, Reuters reported. Police pepper sprayed at least two counter protesters, soon after which Proud Boys left the area.

Around 8 pm, violence broke out between the Proud Boys and counter protesters. The brawl ensued for several minutes before police arrived. An officer told The Washington Post that a man in his 20s had been stabbed, and was taken to the hospital with serious injuries.

Fox 5 DC tweeted that at least 23 arrests had been made related to the protests, citing the DC Mayor's office.

Trump is yet to concede defeat in the elections. President-elect Biden will be sworn in on January 20 next year.

The state of Texas had filed a lawsuit seeking to overturn election results in Georgia, Michigan, Pennsylvania and Wisconsin. The states said the claim had no factual or legal grounds.

How much can Joe Biden get done as US President?

Hunter Biden said he is under investigation for potential tax violations. The president-elect's son has been a frequent target of Donald Trump and Republicans during the presidential election campaign.