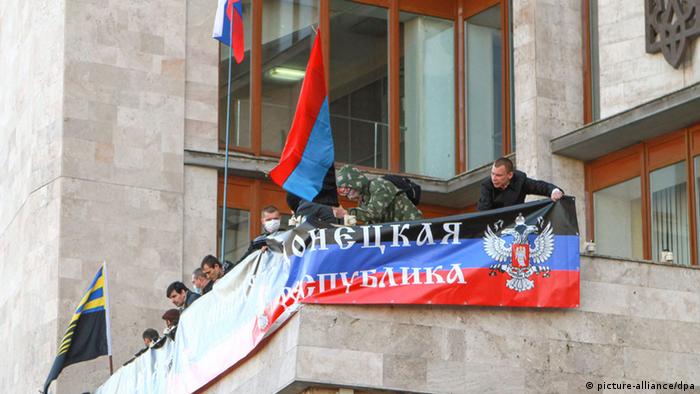 Scores of pro-Russia demonstrators stormed regional offices in the eastern Ukrainian cities of Donetsk and Luhansk on Sunday. Three people were injured, according to a Ukrainian television channel reporting from Luhansk.

Local media also reported similar unrest in Kharkiv, less than an hour's drive from the Russian border. Ukrainian television said the Luhansk protesters were a referendum on joining Russia.

The parliamentary press service in Kyiv said Turchinov, who's a member of Ukraine's pro-European interim administration, was holding an emergency meeting with heads of Ukraine's security services.

Reuters went on to quote the service as saying Turchinov had canceled a trip to Lithuania intended on Monday so he could take charge of the situation.

Ukrainian Interior Minister Arsen Avakov said police would restore order in both cities in eastern Ukraine without recourse to violence.

He claimed that Ukraine's ousted president Viktor Yanukovych and Russia's President Vladimir Putin had "ordered and paid for the latest wave of separatist disorder."

"The people who have gathered are not many but they are very aggressive," Avakov said.

In Donetsk, police reportedly stood by as some 50 protestors, some carrying sticks, stormed the eastern Ukrainian city's regional government building.

They hung a Russian flag over a second-floor balcony and a banner reading "Donetsk Republic" while at least 1,500 protestors surrounded the building, cheering "Russia!"

In the nearby city of Luhansk hundreds of people surrounded the local headquarters of the Ukrainian security service SBU as they sought the release of 15 detained pro-Russian activists.

Several men broke down the door of the building while others pelted its windows with stones and eggs. Police fired tear gas.

The channel said the injured included two protestors and a police officer in riot armor who was carried away on a stretcher.

On Saturday, the SBU had arrested the 15 on allegations that they were planning to seize power in the Luhansk province.

The SBU said it also seized a set of weapons including 300 machine guns and an antitank grenade launcher.

Eastern Ukraine has been the scene of pro-Russian rallies in recent weeks, not far from the border with Russia, where, according to US estimates, Moscow has assembled up to 40,000 Russian troops.

Russia said this week their presence during military exercices was in accordance with international norms.

Donetsk was the home base for Yanukovych, the ousted president who fled Kyiv for Russia in February before Moscow annexed Crimea.

Ukraine's capital and western regions remain tense, being the scene of pro-EU protests in recent months that culminated in sniper fire in central Kyiv. The bloodshed claimed some 90 lives.

On Sunday, Ukraine's far-right Svoboda party said the body of one its more prominent activists, Vasily Sergiyenko, had been found Saturday dumped in the woods with signs of torture. He had been abducted on Friday in the central village of Vygrayev.

Russia provides around one third of the EU's oil and gas and some 40 percent of the gas is shipped through Ukraine. It is also the EU's third biggest trading partner, importing some 123 billion euros' worth of goods.

Angela Merkel says the EU is ready to hit Russia with harsher sanctions should it further violate Ukrainian sovereignty. Her words come as her party begins its campaign for the European parliamentary elections. (05.04.2014)