Ukrainian authorities have arrested a dozen members of the 'Berkut' police riot squad on suspicion of shooting protesters in February. At the time, snipers killed more than 100 people around Kyiv's Independence Square. 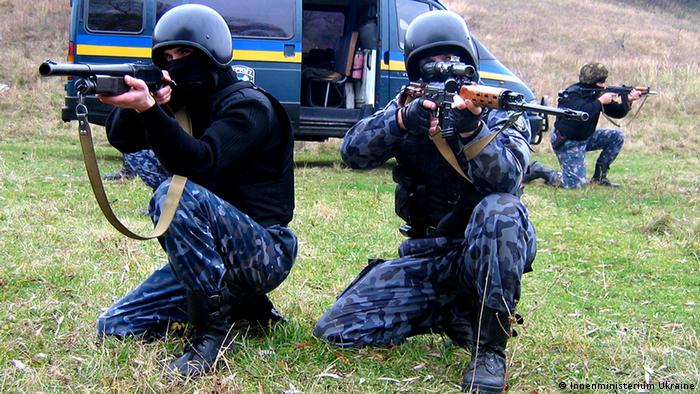 According to Ukraine's acting attorney general, the police officers detained on Thursday were members of a specialized group within Berkut, called the "Black Unit."

"The police officers of this company were trained for special operations including killing people," said Attorney General Oleh Makhnitsky, who was quoted by the Interfax news agency. "They were overseen by the presidential administration."

Among those arrested was a Berkut company commander who allegedly handed out weapons for use against anti-government demonstrators, according to the attorney general's office.

Between February 18-20, snipers fired from rooftops on people in Institutska Street in Ukraine's capital, Kyiv. More than 100 people died during the shootings, most of them protesters. Several police officers were also killed by gunfire.

Berkut was dissolved in late February by Ukraine's Interior Ministry.

Ukraine's interim government on Thursday accused ousted President Viktor Yanukovych of ordering the shootings, with the assistance of Russian agents.

"FSB agents took part in both the planning and execution of the so-called anti-terrorist operation," Avakov said.

But Yanukovych, who fled Ukraine for Russia shortly after the killings, had denied any involvement in the sniper attacks in an interview with the Associated Press on Wednesday.

In a cryptic response to the allegations, the FSB appeared to deny any involvement and point the finger at Ukraine's secret service.

"Let those allegations remain on the conscience of the Ukrainian secret service (SBU)," a FSB spokesman told the RIA Novosti news agency.

Russian officials had previously accused right-wing extremists among the anti-Yanukovych opposition of staging the massacre in order to further inflame tensions and launch a coup.

In March, a conversation between EU foreign policy chief Catherine Ashton and Estonian Foreign Minister Urmas Paet was leaked to YouTube, in which Paet discusses his recent trip to Ukraine.

On the recording, Paet told Ashton that he met with pro-opposition doctor Olga Bogomolets during his trip. According to Paet's account, Bogomolets concluded that the deceased protesters and police officers had been shot dead by the same gunmen. Bogomolets later denied having made such a claim to Paet.

Paet went on to tell Ashton that "there is now a stronger and stronger understanding that behind the snipers, it was not Yanukovych, but it was somebody from the new coalition."