The Night Wolves biker group has reached German soil as they make their way to Berlin. The group is paying homage to the victory of the Red Army over Nazi Germany 70 years ago. 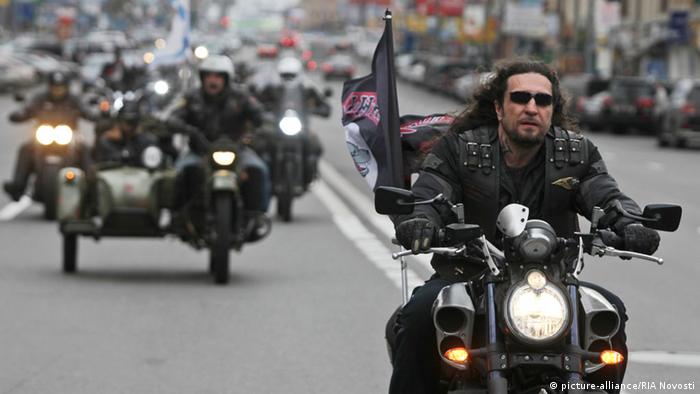 "Roughly 10" members of the Night Wolves club, a Russian biker gang with close ties to Russian President Vladimir Putin, crossed into Germany on Sunday, police confirmed. The group plans to end a 6,000-kilometer (3,700-mile) "victory tour" commemorating the Soviet defeat of Nazi forces 70 years ago in Berlin Saturday, May 9, to coincide with Victory Day celebrations in Moscow.

Despite assertions from Germany's Foreign Ministry that they would attempt to hinder the controversial group from entering the country, the Night Wolves crossed the border at the Bavarian town of Bad Reichenhall en route to their first stop on German soil, Dachau. Alexander Shapovalov, a member of gang, told Russian media that they planned to visit the concentration camp there on Monday.

The German government did manage to cancel the visas of some members of the biker group, prompting protest from the Kremlin, which has demanded an explanation.

The Night Wolves arrived in Germany from Austria, where they had laid a wreath at a monument to the Red Army built by the Soviets in Vienna. Austria's APA news agency reported that the group consisted of only two Russian nationals and around 20 sympathizers, surrounded by 500 supporters and onlookers including the Russian ambassador to Austria.

Members of the Night Wolves are blacklisted in the United States for their role in Russia's annexation of Crimea in 2014, but they enjoy the support of Putin, who is a close friend of Night Wolves president Alexander Saldostanov.

Putin's bikers on the prowl

Poland has announced it would deny the Night Wolves - a Russian motorcycle gang - the right to cross its border. But there are some who support and want to protect the bikers, as Roman Imielski writes from Warsaw. (24.04.2015)