Pressure mounts on Bangladesh over garment workers′ rights | Asia | An in-depth look at news from across the continent | DW | 23.02.2017

Bangladeshi authorities have been accused of harassing and intimidating garment workers and their leaders following recent protests demanding a wage hike. Big fashion brands have pulled out of a major summit in protest. 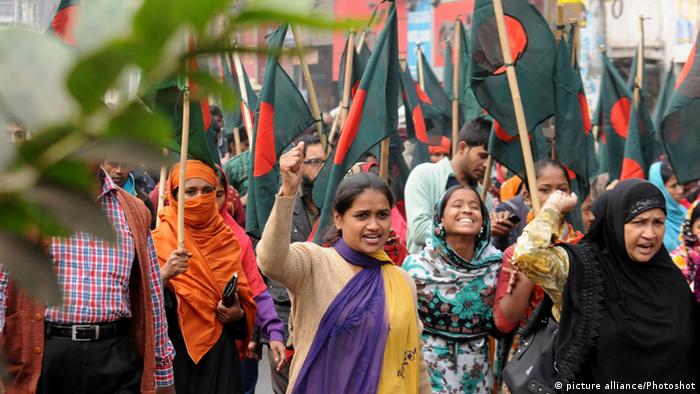 Following the labor action, authorities filed cases against a number of textile workers and trade union leaders, triggering fears of a police crackdown and widespread condemnation.

Major global brands have also intervened, requesting the government review wages, thus raising the stakes for an industry that is critical for the nation's economy.

The South Asian country has the world's second-largest garment industry, which supplies many Western retailers and earns more than $25 billion a year from exports. The sector has about 2,500 factories that employ more than 4 million workers, mostly women.

Garment factories in Bangladesh, however, have garnered a negative spotlight from time to time due to the harsh conditions their workers are subjected to.

And at the end of last year, from December 11 to December 19, textile workers from around 20 factories stopped working and blocked roads during labor protests in Ashulia, an industrial zone near Dhaka, Bangladesh's capital.

The protesters demanded a monthly minimum wage increase from 5,300 takas ($67) to 15,000 takas ($187). But factory owners rejected the demand and temporarily closed many factories, and police began making arrests. More than 1,600 workers have been fired, and police have filed cases against some 600 workers and trade union leaders.

Local journalist Nazmul Huda reckons the textile workers' demand for the pay raise from $67 to $187 is unrealistic. They have never been able to achieve such a huge pay increase in the past. The government set the minimum wage at the current level in 2013 after discussing the issue with labor rights organizations and factory owners associations.

Huda was arrested during the protests on account of his extensive coverage of the event. His exclusive video report of police's crackdown on protesters sparked international criticism. He has been accused of inciting the unrest and remained behind bars for 52 days until his release on bail two weeks ago.

"It is true that the textile workers need a wage rise as living costs have increased in recent years. But the government should negotiate a reasonable increase,'' he told DW.

Kalpona Akter, executive director of the Bangladesh Center for Worker Solidarity, admitted that the protesters hadn't contacted labor rights organizations before making the demand for the wage raise in December last year.

Faces of Poverty - Living on Just a Few Cents

Bangladesh is the second largest textile producer in the world. Three and a half million people here sew jeans, t-shirts and dresses for a pittance - often for up to fourteen hours a day. (22.07.2016)

"They have legitimate rights to demand a pay raise. And they shouldn't be punished for making the demand," she told DW, while also appealing to the government to negotiate the increase taking into account present living costs in the country.

About 20 global textile brands, including H&M, Inditex, Gap, C&A, Next and Primark, wrote a letter to Bangladeshi Prime Minister Sheikh Hasina last month supporting a wage review and expressing their concerns that union leaders and worker advocates were unfairly targeted.

But the government hasn't officially responded to the letter, and the industry leaders don't see any reason to comply with the demand.

Mohammad Siddiqur Rahman, president of the Bangladesh Garment Manufacturers and Exporters Association (BGMEA), said that the factory owners had been following the wage structure announced by the government three years ago. "Workers get at least five percent pay rise every year. Apart from that, bonuses are given to employees based on their performance,'' he told DW.

Rahman blamed a minority of workers for creating the recent unrest. "More than 4 million people are involved in the industry, most of them love this sector as we all earn bread and butter from this, but only a few always attempt to destabilize such a vital sector in various ways. Their common tactic is to create violence and disrupt production," Rahman noted.

The factory owners bemoan that global brands are not ready to pay higher wages and bargain hard, putting enormous pressure on the manufacturers to keep costs lower. While the local industry is second only to China's in size, it's encountering strong competition from textile firms in India and Vietnam.

Stressing the challenging circumstances they face, Rahman urged global brands to help local factory owners pay more to workers by increasing the price of the garment products they buy from them.

More than 41 textile workers and labor leaders were arrested in cases related to the protests in Ashulia, according to Akter. Their immediate release has been demanded by the rights group Human Rights Watch (HRW), which even urged the global brands and donors attending the Dhaka Apparel Summit on February 25 to use the event to call on the government to stop all persecution of union leaders and defend workers' freedom of association.

The summit is viewed as a major event to refurbish the industry's image, which has been severely dented by major industrial accidents over the past few years, including the Rana Plaza disaster in 2013 that killed at least 1,136 workers.

Kalpona Akter confirmed that most of the workers and leaders who were arrested during and after the protests had been granted bail in a surprisingly fast pace. She regards it as a politically motivated move to fulfill the demand for their release put forth by global brands. Rahman also acknowledged that the release of the workers and the leaders had been made in response to the request.

Nevertheless, international brands are yet to be impressed by the move before the summit. The global union federation IndustriALL said on February 22 that leading garment brands - including H&M, Inditex, C&A and Tchibo - had pulled out of the summit, "citing the current climate of repression against unions as incompatible with activities to promote the industry."

Human rights activists see the move as a hint of discontent among big clothing brands with regard to the situation in Bangladesh.

According to Phil Robertson, deputy Asia director at Human Rights Watch, two key speakers who were supposed to address the summit are no longer listed in the event program. "This signals global brands' strong displeasure at how the government, BGMEA and some of its members have dealt with recent Ashulia strikes,'' he told DW.

Meanwhile, Akter said that releasing workers and leaders on bail is not the only thing she was expecting. "The government must drop all the charges filed against the textile workers and their leaders as well as protect workers' freedom of association. All the employees who were sacked for taking part in the protests should be reappointed as well."

Police are searching for survivors after an overcrowded ferry carrying pilgrims flipped over in the Karotoa River. Hundreds die every year in Bangladesh in similar river accidents.

Experts have said Super Typhoon Noru is the strongest storm to hit the Philippines this year. On Sunday, it made landfall not far from the capital, Manila.