Press freedom is dying in Venezuela | World| Breaking news and perspectives from around the globe | DW | 05.02.2015

Press freedom is dying in Venezuela

As Venezuela's economy collapses, its authoritarian government is clamping down on the media. The latest casualty of President Nicolas Maduro's censorship is one of the country's foremost newspapers, 'El Universal.' 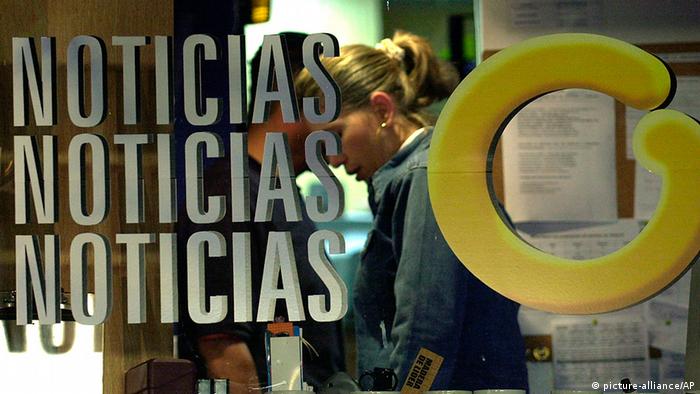 "Food and medicine production has been increased," read the headline of the February 4 edition of Venezuelan newspaper "El Universal." The accompanying article presented a list of concessions that Economy Minister Rodolfo Marco Torres had allegedly wrested from representatives of multinational corporations in a "successful meeting."

"This is something we wouldn't even have mentioned a few months ago, let alone in this form," journalist Juan Francisco Alonso said. He has worked for "El Universal" for twelve years. "Our editorial guidelines say we have to focus on facts instead of parroting announcements." But now, he said, the front page of the once government-critical paper regularly features articles like this.

"El Universal" is just one example of how political pressure has brought the free press in Venezuela under the socialist government's thumb. The late President Hugo Chavez nationalized several television stations by buying shares or failing to renew their licenses. The last to fall was the influential Caracas channel Globovision, which government-affiliated officials turned into a mouthpiece in 2013.

Since then, Venezuela's newspapers have been its last bastion of free reporting. But that, too, is crumbling visibly. In October 2013, the newspaper "Ultimas Noticias," aimed largely at a less educated population, changed hands. Several employees were terminated immediately. Those who remained, according to the non-governmental organization Espacio Público, were put on a tight leash of censorship and threatened with dismissal if they did not follow the new, pro-government, course.

The same fate overtook "El Universal" in July 2014. Former focus issues, such as corruption, inflation and shortages of basic goods, could only be found on the back pages, if at all, Alonso said. Since then, he and his colleagues have been unable to go about their work unimpeded.

"Articles are rewritten overnight, so that it often ends up saying the exact opposite of what the author had written," Alonso said. An active member of the SNTP journalists' union, he describes the new publisher's actions as censorship. 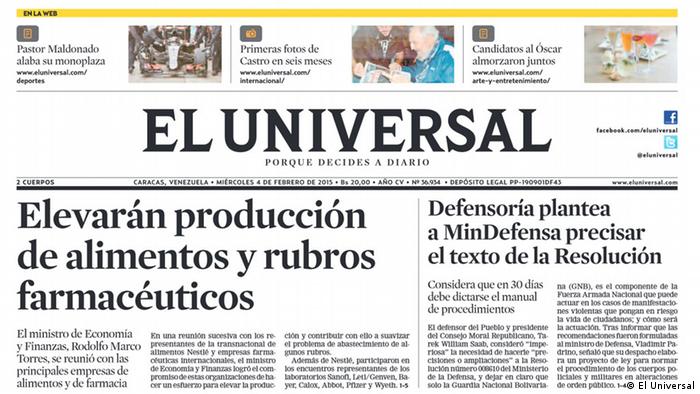 Who that publisher really is, nobody really knows, Alonso said. The only thing that seems certain is that a newly founded Madrid-based investment company called Epalisticia has bought the newspaper. With registered capital of 3,500 euros, it was somehow able to pay 90 million euros for "El Universal."

It was evidently assisted by a Panamanian company whose owner at the time, a Venezuelan businessman, claims not to have known anything about the deal. He told the Spanish newspaper El Pais his signature was forged, and Epalisticia thus bought the company illegally.

But it's also unclear in what form Epalisticia exists, if at all. The telephone number given on its website leads to an anonymous mailbox, while the email address does not appear to work.

Naturally, the question arises as to why government-critical publishers are abandoning their media outlets.

The last remaining founder of "Globovision" said it had become politically, economically and legally impossible to continue to operate the station. And the owners of "Ultimas Noticias" and "El Universal" apparently decided to withdraw from the precarious business and at least rescue their investment.

In recent years, the weak economy, coupled with paper rationing, has massively reduced the circulation of printed newspapers and forced them to slash the number of pages. Online access is free in Venezuela, but the country's media law was extended to the Internet in 2010. Since 2001, this had allowed the government "to prevent the transmission of information if it determines this to be beneficial to the interests of the nation."

That's exactly what the government made use of on February 19, 2014, when it cut off the signal of the TV channel "NTN 24" as it carried live images of a protests in Caracas where the National Guard launched an all-out attack on demonstrators and journalists. 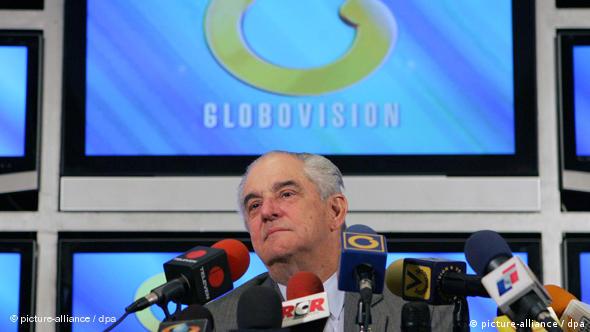 The end of private media

"There's less and less room for public freedom of expression," Espacio Publico's Gloria Salazar said. She leads a project for the organization that logs violations against the right to freedom of expression by the Venezuelan authorities.
There were 86 cases in February 2014 alone. For the entire year Salazar and her partners from the media, universities and human rights organizations found 579 violations. This is by far the highest number since records began in 2001 and more than twice as many as in 2013.

These cover a wide range of offenses, extending from verbal attacks - 13 of which came from President Nicolas Maduro - to intimidation, threats and violence against objects such as cameras and broadcast vehicles - and people. A citizen reporter was beaten so badly by the National Guard at the February protest that he died of his injuries.

There are still critical media in Venezuela - among them some of the country's most venerable names, like "El Nacional" and "Tal Cual." But even here, rights watchdogs such as Reporters Without Borders and Human Rights Watch suggest journalists have taken to censoring themselves out of fear of the consequences of free reporting.

In the short term, Salazar said her hopes rest with the brave citizen journalists who provide their fellow Venezuelans with sensitive information via the Internet, often anonymously. But, she says, it is precisely information of this kind that can be more easily manipulated and orchestrated, because there is no reputable source such as "El Universal" or "Ultimas Noticias" behind it.

German NGO Friedrich Ebert Foundation has been ordered by Thailand's military government to cancel a briefing on media freedom. The ban is seen as part of a crackdown on freedom of expression. (29.01.2015)