A Czech tour operator is launching what looks like a world first for tourism – holidays for cuddly toys. Starting from 90 euros you can treat your teddy bear to a luxury holiday complete with photos. 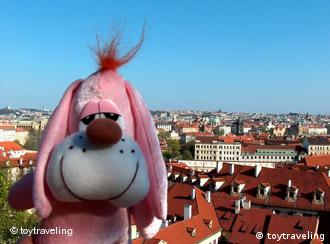 The travel agency didn't say whether the toys enjoyed the view

Travel broadens the mind, or so the saying goes, but why should travel be limited to human beings, or even to animate objects? A Czech tour agency has just launched what appears to be a world first – holidays for cuddly toys.

For 90 euros ($123) and upwards you can treat your fluffy friend to that week in Prague he's always dreamed of – you'll even get daily e-mail updates from him and a photo album when he gets back.

Tourism in the Czech Republic has hit upon hard times – the global economic crisis has produced a 20% drop in visitor numbers to Prague alone. In these tough times, travel agents are desperate for any innovation to breathe life into the ailing tourism sector. One of them, a Prague-based entrepreneur named Tomio Okamura, believes he's found a massive gap in the market: teddy bear tourism.

"There are 1.2 billion teddy bears around the world, which is of course a very big group of potential clients," said Tomio. 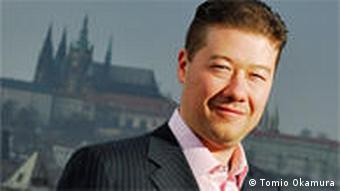 Tomio Okamura is looking to carve a niche in the market

The half-Czech, half-Japanese businessman is no newcomer; he owns a highly successful tour company and he's the vice-president of the Czech Association of Travel Agencies and Tour Operators. Tomio, in other words, knows a sound business opportunity when he sees one.

For Tomio, teddy bear is king

"If you look in people's homes – where is the teddy bear sitting?" he asked, rhetorically.

"The answer is on the bed, in the best place in the house, the place where the teddy bear can look around," he went on.

"So this is the basic idea of our agency – that there are a lot of people who want to make their cuddly toys more happy, because these toys are definitely part of their life."

Last week Tomio helped start up a new company, called Toy Traveling, a travel agency for cuddly toys. The basic package starts at 90 euros, which includes accommodation, a photo album, plus daily emails from your furry friend, although the teddy bear's owner has to pay for posting him to Prague. More expensive options offer everything from candle-lit dinners to aromatherapy and massage underneath Prague's famous Charles Bridge. 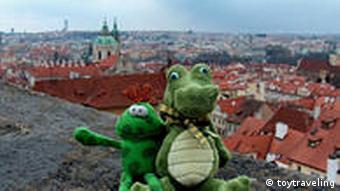 A range of holiday options are on offer to stuffed toys

Cuddly toys in the Dragon's Den

The idea was born on the Czech version of the Japanese reality TV show Dragon's Den, in which budding businessmen with a bright idea pitch it to potential investors. Tomio was one of the panellists. He and fellow panellist Dana Berova, a former government minister, were so impressed with the proposal – the brainchild of a 22-year-old warehouse foreman named Marek Hlavka - that they stumped up 12,000 euros of their own money in return for 15% shares in the new business.

"People are capable of doing anything for their fluffy toys – they'll buy them little sets of clothes and build them little houses, it's the same as Barbie dolls. So I know the market potential is there, particularly in places like Japan, China, America," he explained. 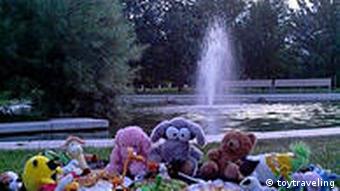 Life's a picnic for some pampered toy pets

Toy Traveling has already received about five dozen bookings in the week since the story went public. Prague, in fact, is just the beginning – the first teddy bears haven't even arrived yet and Tomio Okamura is already making plans to expand the service to Munich, Berlin, Budapest and Bratislava. Rio, Tokyo and fifty other destinations are also in the pipeline.

Tomio is so confident that teddy bear tourism is going to be the next big thing, that Marek has already given up his day job in the warehouse so he can focus all of his time on the business.

Until 1989 a so-called death strip of concrete and barbed wire divided Germany and Europe. The area may have been a symbol of political turmoil, but turned out to be ideal for biodiversity. (20.05.2009)