Austrian poet and novelist Ilse Aichinger has died at the age of 95. Being half-Jewish, she and her family were subjected to persecution by the Nazis, a topic that was central to much of her writing. 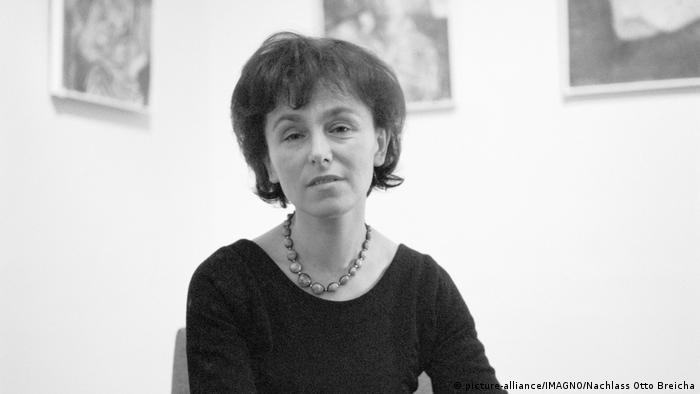 Ilse Aichinger - whose works were among the first to chronicle the persecution of the Jews by the Third Reich - died on Friday, shortly after her 95th birthday, her family said.

Her only novel "Die grössere Hoffnung" (The Greater Hope) brought her to sudden prominence when it was published in 1948. The book drew on her dark experiences after the annexation of Austria by the Nazis.

Aichinger was born in Vienna in 1921, along with a twin sister, to a father who worked as a teacher and a Jewish mother. She spent her childhood in the city of Linz but, after her parents divorced, she moved to Vienna along with her mother and sister.

The persecution of her family began after the Nazis took control of Austria. Ilse's sister Helga escaped from Austria to Britain through the "Kindertransport" rescue initiative, but due to the outbreak of World War Two Ilse could not follow her. Having half-Jewish parentage, she was barred from further study after leaving school, and forced to work as a slave laborer.

Aichinger was assigned a room opposite a Gestapo headquarters - where she was able to hide her mother. While both survived the war, her beloved grandmother, as well as her aunt and uncle, were "resettled" and died in a death camp near the Belarusian capital, Minsk.

The sight of seeing her grandmother Gisela being taken away was to have a profound effect on the young Ilse.

After the war she became a medical student, but also published essays and never completed the course. Her works were among the first pieces of Austrian literature to deal with the subject of concentration and death camps, the debut being "Das Vierte Tor" (The Fourth Gate).

Later, the fairytale-like, strongly subjective style of "Die grössere Hoffnung" would alienate some critics, but it won the approval of many of her fellow writers.

Aichinger met her husband, poet and radio play author Günther Eich, at a meeting of the Group 47 literary association of postwar writers.  Her radio play debut "Knöpfe" (Buttons) was broadcast in the year of their wedding and the pair lived in both Bavaria and Austria's Salzburg region.

Group 47 - whose goal was to spread the message of democracy to the German people after the fall of the Third Reich - bestowed its Literature Prize on Aichinger in 1952 for the serialized work "Spiegelgeschichte" (Story in a Mirror). The work was unusual both for being written in the second person, and for telling the story of the life of a young woman in reverse.

In a review of a collection of her translated works, "The Bound Man and Other Stories," the US reviewer Anthony Boucher decribed Aichinger as "a sort of concise Kafka."

Although Aichinger was not a prolific writer, her poetry, short stories and radio plays held a distinct place in German-language postwar literature. Her work earned her multiple awards, including the German international literary Petrarca Prize in 1982.

After the death of her husband and mother, Aichinger fell silent as a writer for many years but did resume her short works in the late 1990s, regularly picking up prizes.

During much of her life Aichinger remained troubled by her past, and was said to have regularly attended up to four cinema screenings in a single day, to be able to forget.