Pope′s meeting with Protestants could heal some old wounds | News and current affairs from Germany and around the world | DW | 19.09.2011

Pope's meeting with Protestants could heal some old wounds

During the pope's visit to Germany, he will meet with prominent German Protestants at an ecumenical summit in Erfurt. The meeting is particularly symbolic as this part of Germany is steeped in Reformation history. 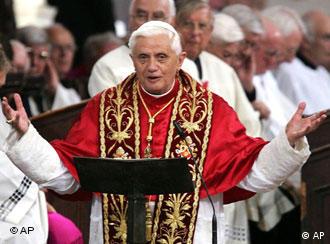 The visit is an opportunity to heal relations with Protestants

One of the personal requests made by Pope Benedict XVI for his visit to Germany was to have the opportunity of having a personal meeting with officials from the Protestant church.

Initially surprised, the Protestant church has said it will be delighted to speak directly with the Pope. Nikolaus Schneider, president of the Council of the Evangelical Church in Germany (EKD) told Deutsche Welle that for the pope to meet with "the church of the Reformation" was "a very strong symbol."

As symbols go it is unprecedented for the leader of the Catholic faith to meet in central Germany – the heartland of the Reformation, the Augustinian monastery in Erfurt. The same town where the reformer Martin Luther lived and studied as a Catholic monk between 1505 and 1511. It was here where Luther's ideas of a renewed church were developed and then propagated to the world. 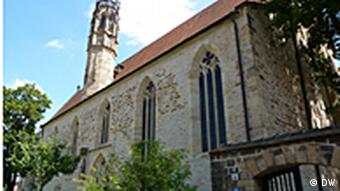 Erfurt's Augustinerkloster is the venue for the joint ecumenical summit

Another novelty to the trip is that the Pope will answer spontaneous questions from the Protestant delegation.

The highlight of the meeting will be a jointly designed special service, with the homily given by Pope Benedict XVI. Due to a strong difference of belief between Catholics and Protestants on key elements of the Liturgy of the Word service, Holy Communion or the Eucharist will not form part of the proceedings. Both denominations recognize the death and resurrection of Jesus Christ, and the last supper of Jesus and his disciples on the eve of his crucifixion. However the denominations are divided on the sacrament that came from the Last Supper. The Protestant church allows any baptized Christian to take part in the sacrament, whereas Catholics believe the Eucharist is strictly reserved for other Catholics.

Schneider believes this dividing wall between the denominations is not likely to be torn down any time soon. However he hoped an agreement could be reached on interfaith couples where one partner is Catholic, the other Protestant.

"We need significant improvement in this area," said Schneider. "People's lives together includes the church. Church is more than just the place where the service takes place."

Whether progress on this issue is made in Erfurt on this issue or not will be interesting. However the leader of around 25 million protestant church-goers has said that expectations should be kept realistic. Huge leaps have already been made in relations between the two denominations. 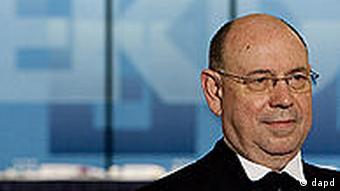 Nikolaus Schneider is president of the EKD

"Hostility has disappeared completely," said Schneider. "We treat each other amicably, like brother and sister."

Among the major achievements of ecumenical dialogue was the Joint Declaration on the Doctrine of Justification in 1999. Here both parties agreed on a "common understanding of our justification by God's grace through faith in Christ." 500 years ago, the issue of justification was a major reason for the schism between the two braches of Christianity. More progress was made in 2006 when both denominations recognized each other's versions of the sacrament of baptism as the basic sacrament of Christian existence.

However many protestants are still hurt by a Vatican document published in 2000 called "Dominus Iesus." It was rubber-stamped by one Cardinal Josef Ratzinger, the present Pope, who was then head of the Roman Congregation. The document reaffirms that the Catholic Church is the sole true Church of Christ.

Ilse Junkermann, bishop of the Protestant Church in central Germany said they would like an official amendment. She cites comments made by Benedict XVI in the second volume of his book where he revises some controversial statements.

"If he would do this in public, then his visit would be successful as we could see eye-to-eye," said Junkermann.

Germany's political opposition plans to boycott a speech by the pope to parliament out of concern that it violates state neutrality. Catholic bishops, meanwhile, have criticized the move as unjustifiable. (15.09.2011)

Protestants gather in Dresden to press for social justice

Protestant Christians from across Germany are trying to take an active role in making society more just. The discussion at this year's "Kirchentag" meeting touched on some controversial issues. (03.06.2011)