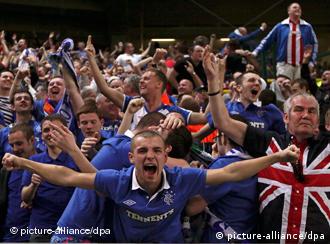 Glasgow Rangers fans have been fined for singing illegal songs

In Scotland, football games between the two Glasgow clubs Celtic FC and Rangers FC can quickly turn into violent affairs. A showdown between the country's two top teams is almost certain to bring out bagpipes, riot police on horses and surveillance helicopters.

Scottish law enforcement isn't taking any chances with the conflict after parcel bombs were sent to Celtic manager Neil Lennon and two other Celtic-supporting figures in recent months. The fans know they are being monitored.

For decades the clubs have found themselves entangled in sectarian behavior which society at large would like to see the end of. One Rangers fan, a 44-year-old named Kenny, said his allegiance to the team is part of his identity.

"Football is for the masses," he told Deutsche Welle. "It is still a normal working man's sport. We all just sit together. For eighty or ninety minutes, you're not a lawyer. I am not a cook. My pal is not a bar man. We are all Rangers fans and we are there to support the same thing." 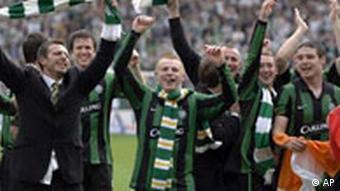 Celtic FC manager Neil Lennon was targeted in a bombing

The rivalry between the teams reinforces a century-old rift between Protestants and Catholics. Over the years and especially during the Irish famine of the 1800s, many Irish families came to live and work in the thriving industrial heartland of Glasgow. Both clubs were formed at the end of the 19th century; Rangers were founded as a Protestant club, while Celtic were Catholic.

Although friction between Catholics and Protestants in Glasgow has never quite reached the war footing of the conflict in neighboring Northern Ireland, the social fabric still suffers from deep divisions.

Kenny's colleague, a 60-year-old Celtic fan named Jack, says he goes to games a lot less these days because the tension now between the two teams' fans is too much for him.

"I like football, but the majority of fans nowadays, it is not football, it is a religion - Catholics against Protestants," he told Deutsche Welle. "The shouting kicks in and someone starts a fight. The whole area just bursts out into fighting and it is all about Catholics and Protestants, nothing to do with football." 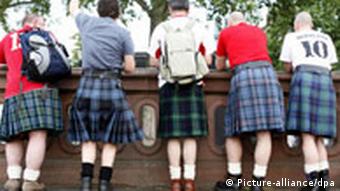 There's one dead-certain way for Rangers fans to start a fight in this atmosphere. Singing "The Famine Song," "No Pope of Rome" or "Hullo, Hullo" is illegal in Scotland and will lead to arrest.

John Kelly, a sports sociologist from Edinburgh University, says the "Hullo, Hullo" is the most offensive of the three. The song is about the Billy Boys, a 1930's Glasgow street gang known for slashing at Catholic boys and men with open razors, he said.

"Suffice to say, there is one line that says 'Hullo, Hullo, we are the Billy Boys, we are up to our knees in Fenian blood, surrender or you'll die because we were the Brigton Billy Boys,'" he told Deutsche Welle. He added that 'Fenian' in Scottish discourse is synonymous with Catholic.

The sectarian chants have now hit Rangers where it really hurts - in the pocket. Recently, UEFA fined Rangers nearly 80,000 euros and banned fans from the club's next away game because of discriminatory chanting. They also received a suspended ban on a second away match in Europe. Rangers fans will be banned from a European game in Ibrox - the team's home stadium - if they are caught misbehaving over the next 3 years. 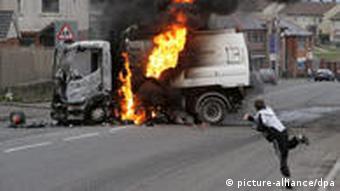 Tensions aren't as bad as in Northern Ireland, though

Andy Kerr, President of Rangers Supporters Assembly, agrees fan violence and sectarianism is a problem the club has to tackle.

"Anything that is of a sectarian nature is offensive, we have to try and stamp it out," he told Deutsche Welle. "Otherwise, we are just going to be under more and more pressure to get our house in order. So now is the time to stop it."

At the same time, however, Kerr doesn't believe sectarianism in Scotland can be stamped out by banning these songs.

Catholics in Scotland are educated in separate schools, he says, and the divisions in society continue beyond into the workplace. Religious prejudice is deemed acceptable, even normal, in many Scottish communities, and the media would rather avoid the sensitive subject.

"Our priority is to get it sorted out in the football environment," Kerr said. "Obviously, it spans the whole social culture of Scotland. People have been trying a long, long time to do something about it. We are going to try and take the bull by the horns from the football perspective and try to get people to behave in a manner that we can all accept."

The entire problem has been called "Scotland's Shame." Until now, there has been no public appetite to deal with it. However, the parliament in Edinburgh now believes it has the public's support for action, and the Scottish Government is making a serious attempt to turn the corner toward a society where sectarianism is a thing of the past.

Britain's referendum on electoral reform pitted the status quo against a compromise that neither side really wanted. But the Scottish National Party's gains in parliamentary elections may trigger a more significant vote. (06.05.2011)

Claude Choules, the 110-year-old British-born man believed to be the last WWI combat veteran, has died. Choules, a staunch pacifist, published a book about his life in 2009, called "The Last of the Last." (05.05.2011)

For generations Irish people have moved abroad in search of work, pausing during the brief interlude of the Celtic Tiger boom years. Now they are packing their bags again. (03.03.2011)

Listen to the DW report on Sectarianism in Football in Scotland

Religious minorities in India have reported increased discrimination and violence since Narendra Modi took office in 2014. The pope wants to make an official trip to the South Asian nation, but has so far been shunned.