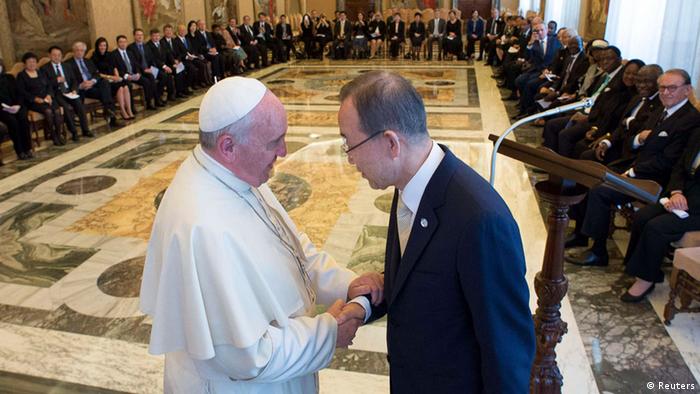 Welcoming Secretary-General Ban Ki-moon to the Vatican, Pope Francis urged greater progress on targets stated in the UN's Millennium Development Goals. Despite the progress made on issues such as combating poverty, Francis called on an audience of leading UN officials "to get even more engaged in the process."

Francis identified school education and the fight against poverty as two crucial areas for the development goals, launched in 2000 with a 2015 deadline. He called on the UN to set more ambitious future targets that would "have a real impact on the structural causes of poverty and hunger."

"Specifically, this involves challenging all forms of injustices and resisting the economy of exclusion, the throwaway culture and the culture of death which nowadays sadly risks becoming passively accepted," Francis said.

A frequent critic of the widening gap between rich and poor, the pope proposed a "worldwide ethical mobilization" of solidarity with the poor. The Argentine pontiff said this could be achieved through "the legitimate redistribution of economic benefits by the state, as well as indispensable cooperation between the private sector and civil society."

Francis was similarly critical of unfettered capitalism in his address to the World Economic Forum, the unapologetically elitist annual gathering in the Swiss resort of Davos. Furthermore, his apostolic exhortation "The Joy of the Gospel," published in November, criticized trickledown economic theories as naive and unfounded.

'From conception to natural death'

Ban Ki-moon offered a reciprocal invitation to his host in the Vatican on Friday, asking Francis to address the UN in New York at a later juncture. The Vatican is yet to confirm any such trip, but Francis is widely expected to visit the US late in 2015 for a church meeting on families in Philadelphia - one possible date for an appointment at the UN.

The pair met just days after the Roman Catholic Church was heavily criticized in the second round of investigations by a UN committee looking into sexual abuse within the church. Neither Francis nor Ban spoke to this topic on Friday, although Francis did raise the Vatican's objection to abortion in thinly-veiled terms.

The pontiff called for respect for life "from conception to natural death," while his previous allusion to a culture of death seemed to impact on debates on both abortion and end-of-life ethics.

High-profile policy makers and business leaders from around the globe have come to Davos, Switzerland to attend the Global Economic Forum (WEF). They have until Saturday to debate pressing political and economic issues. (22.01.2014)

Pope Francis has denounced unfettered capitalism in a manifesto for his papacy, beseeching global leaders to fight poverty. He also told priests to venture into "dirty" streets to minister to world's poor and oppressed. (26.11.2013)