Pope Francis has arrived in South Korea, marking the first papal visit to the country in 25 years. During his five-day trip, he will attend a youth festival and meet some of the country's five million Catholics. 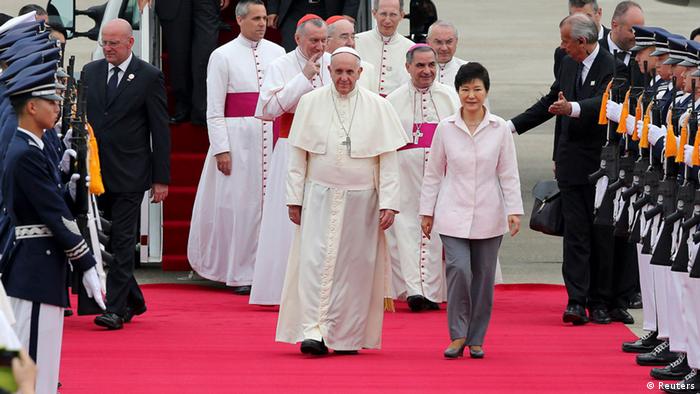 Pope Francis' plane touched down Thursday at an air base in the South Korean capital Seoul, where he will spend five days travelling around the country. He was greeted by President Park Geun-hye on the runway.

The highlight of his trip will be attending a Catholic youth festival.

While en route to South Korea, the pontiff sent a telegram of greeting to China's President Xi Jinping and the Chinese people. The pope customarily sends telegrams to the leaders of countries as he passes through their airspace.

"Upon entering Chinese air space, I extend my best wishes to your excellency and your fellow citizens, and I invoke divine blessings of peace and well being upon the nation," the pope said in his telegram. China's communist government does not allow Catholics to recognize his authority.

However, the fact that the pope was allowed to cross Chinese airspace at all was seen as a positive step forward in relations between the Vatican and Beijing.

For the third foreign trip of his papacy, Pope Francis is visiting South Korea. He is expected to deliver a clear message to Pyongyang. Spontaneous departures from the official program can't be ruled out. (14.08.2014)