Pope calls for urgent action to avert Mideast bloodshed | Europe | News and current affairs from around the continent | DW | 06.06.2010

Pope Benedict XVI wrapped up a visit to Cyprus on Sunday calling for an end to bloodshed in the Middle East and highlighting the plight of Christians in the region. 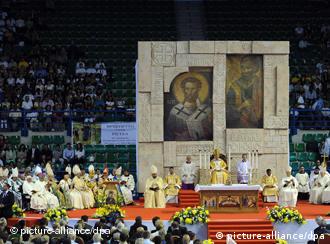 The pope warned extremist currents were a threat to Christians, Jews and Muslims

Speaking to a crowd of some 10,000 Cypriots and pilgrims from Syria, Jordan and Lebanon in a stadium outside the capital Nicosia, Pope Benedict XVI urged the world community to resolve the ongoing tensions in the Middle East before they lead to greater bloodshed.

The pontiff prayed for the success of a synod of Middle Eastern bishops in Rome in October, which is set to grapple with the problems of the region.

Calling the latest tensions between Israel and Palestinians "a grave matter," Benedict said he hoped the meeting would "help focus the attention of the international community" on the conflict in the region and the "plight of Christians in the Middle East who suffer for their beliefs."

Following the outdoor service, the Pope unveiled a working paper for the synod. Called "Instrumentum Laboris," it expresses concern about radical Islam.

"These extremist currents, clearly a threat to everyone - Christians, Jews and Muslims - require joint action," the document states.

The working paper laments the dwindling numbers of already minority Christians in the Middle East.

"Their disappearance would impoverish the pluralism which has always characterized the countries of the Middle East and those countries would be at a disadvantage without the Christian voice," it said.

The 40-page paper also says that the unresolved Israeli-Palestinian conflict contributed to the political, economic and religious tensions in the region.

The Vatican backs a Palestinian homeland alongside Israel's right to exist within internationally recognized borders.

Pope calls for harmony during his first visit to divided Cyprus

Pope Benedict XVI has arrived in Cyprus for a three day visit – his first ever to a majority Orthodox country. It comes the day after a leading bishop in Turkey was murdered. (04.06.2010)

Driver charged with murder of Catholic bishop in Turkey

A Turkish court has charged the driver of one of the country's top Roman Catholic bishops with his murder. He has been identified as Murat Altun. (04.06.2010)

Pope Benedict XVI received an enthusiastic reception in Portugal, despite the paedophilia scandal that has engulfed the Catholic Church. Nearly 400,000 worshippers attended a Mass at the shrine of Fatima. (13.05.2010)