Pope Benedict to get new, greener set of wheels | Europe| News and current affairs from around the continent | DW | 19.06.2011

Pope Benedict to get new, greener set of wheels

A German news report says carmaker Mercedes-Benz is designing a new hybrid four-wheel drive for Pope Benedict XVI. The Vatican has confirmed the greener 'Popemobile' could hit the road next year. 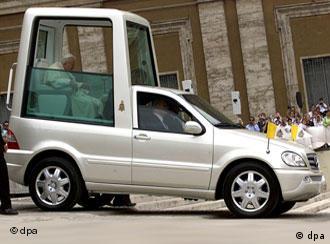 The pontiff's trademark white 'Popemobile' is set to become greener

German weekly newspaper 'Wirtschaftswoche' reported on Saturday that Mercedes Benz is designing an environmentally-friendy four-wheel drive for Pope Benedict XVI or the "green pope" as he is sometimes labeled in the Italian Press.

The report said the vehicle could be ready in time for the pope's visit to his native Germany in September. The Vatican however has denied it.

Vatican Spokesman Federico Lombardi told news agency AFP that the car, which is currently under development, will not be ready before the end of next year.

A move towards a hybrid car was first revealed in December when Cardinal Giovanni Lajolo, president of the governorate of Vatican City State, suggested the pontiff was "prepared to use an electric Popemobile," as long as it was efficient and reliable.

For safety reasons, however, the car currently being designed is not a purely electric car. It is reportedly based on the four-wheel drive M Class Mercedes with a hybrid electric-petrol motor.

The German paper reported that the pope would be unable to drive an electric car as it would not be able to take off swiftly in an emergency. The new car's rechargeable lithium-ion battery will allow it to drive 30 kilometers (16 miles) without any polluting emissions.

Mercedes, the provider of cars to successive popes since the 1980s, has refused to give any details regarding the design for "reasons of confidentiality."

The Catholic Church has beatified the venerated priest Alois Andritzki, who was murdered by the Nazis at the Dachau concentration camp. Andritzki has long been revered by Sorbs, a minority ethnicity in eastern Germany. (14.06.2011)

Making his 19th trip abroad since becoming the head of the Catholic Church, Pope Benedict XVI is in Croatia to promote Catholic family values - and lend his support to the country's bid for EU membership. (04.06.2011)

German premium carmaker BMW launched a new sub-brand for environmentally friendly vehicles on Monday. The 'BMW i' models will be constructed of lightweight materials and powered by electric and hybrid engines. (21.02.2011)