The Catholic Church has beatified the venerated priest Alois Andritzki, who was murdered by the Nazis at the Dachau concentration camp. Andritzki has long been revered by Sorbs, a minority ethnicity in eastern Germany. 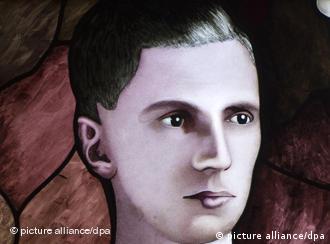 Andritzki is now known to German Catholics as 'Blessed Alois'

German Priest Alois Andritzki, who died at Nazi hands in Dachau, has been bestowed the title "Blessed" by the Catholic Church.

Andritzki, who was arrested by the National Socialists in 1941 for criticizing the regime and later murdered by lethal injection, was beatified Monday at the Dresden Cathedral in a bilingual ceremony in German and Sorbian, the language of the eastern German Slavic minority to which he belonged.

Roman Cardinal Angelo Amato read the papal declaration of Andritzki's beatification at a ceremony which drew an estimated 11,000 people, many of them in traditional Sorbian dress.

Dresden's Bishop Joachim Reinelt praised Andritzki in his sermon, saying the priest had showed a "bright face" even through the "most awful beastly work" at the Dachau concentration camp.

Saxony State Premier Stanislaw Tillich, who spoke at the ceremony in Sorbian, said Andritzki had "unshakably stood by his faith during the time of the inhuman Nazi dictatorship." 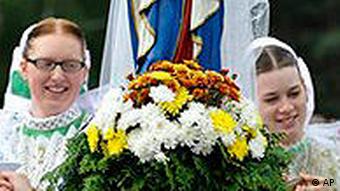 Andritzki has long been venerated by eastern Germany's Sorbs

Pope Benedict XVI, who approved Andritzki's beatification in December, honored the priest on Sunday during his noon prayer St. Peter's Square. Benedict said Andritzki remained an attestor to the faith even in times of great suffering.

Andritzki has long been revered by eastern Germany's Catholic Sorbs. Beatification is the third of the four steps in the canonization process.

After more than 25 years as the leader of the Catholic Church, many of Pope John Paul II's followers want to see him made a saint. As the deceased pontiff comes closer to canonization, others are criticizing the Vatican. (30.04.2011)

Catholics may be leaving German churches, but their fellow congregants from around the world are writing in with their ideas on how the Church might be fixed. (08.04.2011)