Pooh the bionic cat gets back on all fours

When Bulgarian stray Pooh lost his hind legs in a road accident, it seemed he would never be back on his paws again. Now, after veterinary surgeons tried out a groundbreaking procedure, he can run and even jump again.

One-year-old stray Pooh is back on all fours after groundbreaking surgery carried out for the first time in continental Europe.

The black-and-white feline is thought to have lost his hind legs in a mishap involving either a car or train in April last year. Pooh and another cat, Stiven, were taken to Sofia's Central Vet Clinic by the animal charity Let's Adopt Bulgaria.

Veterinary surgeon Vladislav Zlatinov is the first vet in Europe to have success in applying the pioneering method of Irish neuro-orthopaedic surgeon Noel Fitzpatrick, who carried out a similar operation in Britain.

Zlatinov scanned relevant papers in scientific journals to prepare for the procedure, but without any commercial implants available, he had to have some parts custom-built. 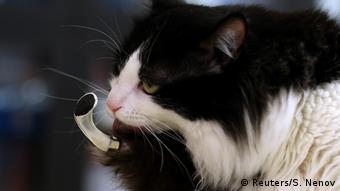 When the complex surgery was completed, Pooh had a pair of titanium legs implanted into his body. These can then be connected to external prostheses which can be changed like shoes.

Pooh, whose name means "fluff" in Bulgarian, can move pretty well considering the circumstances, chasing toy mice and fully exploring his new environment. He can even jump up for toys.

"We're very proud," said Zlatinov. "It was quite a success ... It gives hope to other patients."

"Cats who lost one leg do pretty well. But what happens if they lose both their hind legs? Yes, they move somehow, but what quality of life are we talking about?" he said.

Better than a life on wheels

Until Pooh's skin grows over the bone and stem enough to be sure there is no infection, veterinary staff are still supervising his recovery closely.

Other than that, the only thing that's different to before is a tiny tapping sound whenever his polymer and rubber paws hit the floor. It's the sort of independence that the normal solution - a set of wheels - would never have offered.

Staff at the clinic are looking for a new home for Pooh, and there have already been several applicants.

Since Pooh's operation, Zlatinov has carried out the procedure on a number of other cats including Stiven, who was also said to be doing well.

Bionic legs for an equestrian

The number of people wearing artificial limbs is declining thanks to advances in medicine. (20.05.2014)