Political fight follows clashes between police and protesters in Stuttgart | Germany| News and in-depth reporting from Berlin and beyond | DW | 01.10.2010

German politicians have reacted to Thursday's clash between protesters and police in Stuttgart over the city's train station project. Meanwhile, protests have resumed in Stuttgart amid calls for peace. 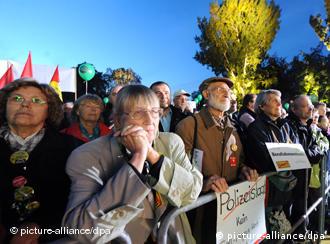 An operation to cut down a few dozen trees as part of Stuttgart's train station renovation project has turned into a nationwide political blame game.

A day after thousands of protesters attempting to halt the tree-cutting operation in the city's Schlossgarten park were dispersed with water cannons, tear gas, and pepper spray by police, politicians in Berlin weighed in on the issue and the use of force by police in Stuttgart. 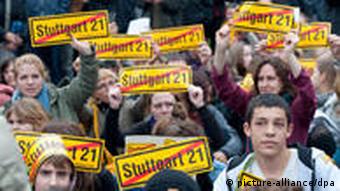 Stuttgart 21 is a multi-billion-euro controversy

German Chancellor Angela Merkel, who has said she supports the 'Stuttgart 21' train station project, defended the right of the protesters to hold peaceful demonstrations.

"Protests are of course allowed," Merkel said in an interview with German public broadcaster SWR. "After all we live in a free country. But anything that leads to violence must be avoided."

On Friday evening, protestors reconvened in Stuttgart for a march through the city that was to culminate at the Schlossgarten park. Organizers explicitly called for a peaceful demonstration from the estimated 50,000 participants that attended.

Thursday's protests, however, took a violent turn when police clashed with some of the thousands of demonstrators gathered in the park to prevent trees from being cut down in connection with the Stuttgart 21 project. Water cannons, tear gas, and pepper spray were used by police to disperse the crowd. Among the protesters were school children and elderly citizens. 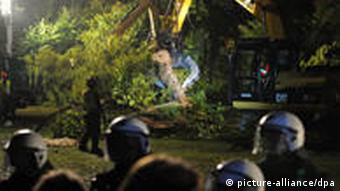 Police cleared enough protesters to allow trees to be cut

"No one understands when special commandos are brought in with billy clubs to go after young people and retirees," said Thomas Oppermann, a senior member of the opposition Social Democrats.

Renate Kuenast, leader of the Green Party parliamentary faction, said the police crackdown was an attempt to criminalize good, democratically minded citizens. She called for a halt to the project, and an investigation into what happened during Thursday's protests. Kuenast's party was unsuccessful in its bit to get the the incident onto Friday's agenda in the Bundestag.

In Baden-Wuerttemberg, the southwestern German state where Stuttgart is located, Premier Stefan Mappus was clear about how he hopes future dialogue between the two sides of the Stuttgart 21 project will go. 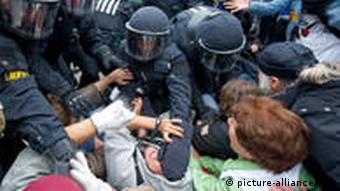 Critics say police were too harsh in Stuttgart

"The incidents of yesterday must not be repeated," he said, calling for more peaceful debate on the topic. "There cannot be any further escalation, no further injuries to protesters or police."

He also defended the action of police in Stuttgart, saying bottles had been thrown at them.

However, many of the demonstrators in Stuttgart on Friday night shouted chants of "Out with Mappus!" placing part of the blame for Thursday's violence on him.

According to police, 130 people were treated for injuries, 16 of whom were treated in the hospital. Protest organizers say the number of people injured was closer to 400, with most of the injuries stemming from tear gas.

Twenty-nine protesters were taken into custody, and charges were laid in 30 cases. A further demonstration has been planned for Friday evening, with organizers hoping for a turnout of 100,000 people.

The Stuttgart 21 project is to transform the current aboveground station to underground train station that would link it to a 1,500-kilometer (930 mile) high-speed rail network across Europe. Supporters of the project say it will reduce travel times. The cost is estimated at seven billion euros ($9 billion), but opponents say they fear that this figure will spiral out of control.

Thousands of demonstrators have been held back by a chain of police officers as work begins on cutting down trees in a Stuttgart park. The trees are being cleared for building work on the "Stuttgart 21" rail project. (01.10.2010)

Opponents and supporters of the controversial multi-billion-euro Stuttgart 21 railway and urban development project have begun meeting for exploratory talks aimed at cooling the weeks-long standoff. (24.09.2010)

Politicians react to police operation against protesters in Stuttgart (01.10.2010)