First trees cut down at controversial Stuttgart railway project site | News and current affairs from Germany and around the world | DW | 01.10.2010

Thousands of demonstrators have been held back by a chain of police officers as work begins on cutting down trees in a Stuttgart park. The trees are being cleared for building work on the "Stuttgart 21" rail project. 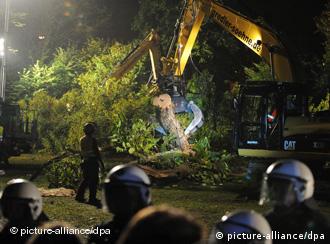 Police formed a barrier between protestors and trees

An estimated 1,500 demonstrators were held back behind police cordons as work began before dawn on Friday to fell the first of dozens of trees in Stuttgart's historic palace gardens.

On Thursday thousands of protestors had assembled in the Schlossgarten park to protest against plans to cut down the trees as part of an multi-billion euro train station renovation project called "Stuttgart 21." 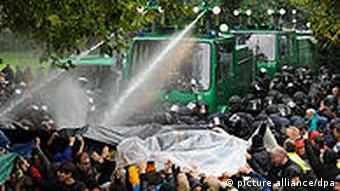 Water cannons were used on those occupying the park

Nine environmental activists were physically removed from the trees as the police cleared the area. Officers also used tear gas and water cannons to evict the protestors from the park.

Workers hired to cut down 25 trees were surrounded by a protective chain of around 1,000 police officers, separating them from the protestors. Police described the mood as "heated" and "irritated," adding that during the work protestors blew whistles and some threw bottles at the police.

On Thursday police forcibly removed protestors from the park, some of whom had chained themselves to the trees. As tensions between the police and the demonstrators intensified, police started to use pepper spray and water cannons on the protestors. 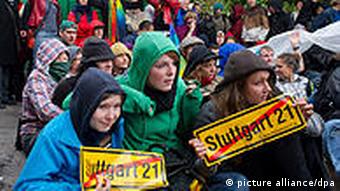 Children and young people were among the demonstrators

Among the protestors was a group of schoolchildren, who, eyewitnesses said, were also hit by water cannons and tear gas.

Estimates vary on the number of injured, with demonstrators saying several hundred were affected by the clashes with police. The German Red Cross said 99 people were treated by them, 80 of whom had irritated eyes. A further 10 people were hospitalized. According to the police, among the injured were six minors, including four 16-year-olds, a 14-year-old and a 12-year-old.

Stuttgart 21 has become a highly divisive topic. Opponents of Stuttgart 21 say the cost - 7 billion euros ($9.5 billion), according to Germany's rail operator Deutsche Bahn - could spiral out of control and would be better spent to repair existing stations. Proponents say the project will provide much-needed improvements to Germany's high-speed rail network. 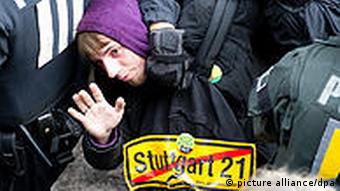 Renate Kuenast, head of the parliamentary group of the Green party in Berlin, said the reaction of the police was "no way to solve the problem. This will only escalate things, problems will become worse."

Peter Hauk, the caucus chairman of the ruling Christian Democrats in the state parliament of Baden-Wuerttemberg, where Stuttgart is located, said it was "irresponsible" for parents to take their children to the protest.

Opposition transport spokesperson for the Social Democrats Uwe Beckmeyer has called for the immediate stop to the building.

"I call on Deutsche Bahn to do anything to prevent a further escalation of the problem," said Beckmeyer. "It's unbelievable what has happened there," he added.

A special session of the federal parliament's internal affairs committee has been requested by the Left Party and scheduled for early Friday morning.

Opponents and supporters of the controversial multi-billion-euro Stuttgart 21 railway and urban development project have begun meeting for exploratory talks aimed at cooling the weeks-long standoff. (24.09.2010)