Police search for man after deadly shooting at US Waffle House

A nearly naked gunman has killed four people with an assault rifle at a Waffle House restaurant in the US city of Nashville. Police in Tennessee are searching for the suspect, who fled after a customer snatched his gun. 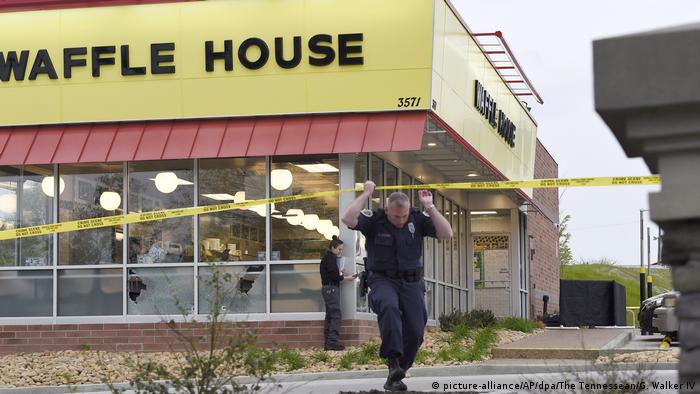 A gunman wearing only a jacket killed four people at a Waffle House 24-hour restaurant in Nashville in the US state of Tennessee early Sunday, then fled the scene after a customer wrested the assault-style rifle from him.

Two of the dead were shot outside the restaurant and two more inside. Four people were also wounded, two critically, in the 03:25 (08:25 UTC) attack.

Police launched a manhunt for the suspected shooter, who they named as 29-year-old Travis Reinking and believe is armed and dangerous.

A Waffle House customer wrestled with the shooter after his AR-15 ran out of ammunition or jammed.

James Shaw Jr. is being heralded as a hero for intervening, although he told a press conference that he was just trying to save his own life.

"I just wanted to live," said Shaw. "I figured if I was going to die, he was going to have to work for it. I was completely doing that to save myself."

The suspect fled the scene naked after throwing off a green jacket, which contained two magazines loaded with ammunition, police said.

Police said they believed Reinking then went to his nearby apartment to fetch pants and shoes. A shirtless, shoeless man was later seen entering a forest, police said.

Nashville Police Chief Steve Anderson said there was no known motive, although the suspect may have "mental issues."

US Secret Service agents arrested Reinking last July for being in a restricted area of the White House, officials said.

He reportedly wanted to meet with President Donald Trump.

Police in the state of Illinois, where Reinking was living at the time, subsequently took four guns away from him, including the AR-15 used in Sunday's attack.

They later handed the weapons over to Reinking's father under the promise he would keep them. Nashville Police spokesman Don Aaron said that the father "has now acknowledged giving them back to his son."

Police records in Illinois showed Reinking had a history of disturbing behavior.

US gun laws - enough is enough

March for Our Lives - uphill battle for stricter gun laws

Speaking at a press conference, Nashville Mayor David Briley, a Democrat, said these "weapons of war" needed to be removed from the nation's streets.

"We need comprehensive gun reform to address mass shootings, domestic shootings, accidental shootings and homicides,"  Briley said. "It's happening too much. Enough is enough," he added.

Following a mass shooting that claimed 17 lives in the Marjory Stoneman Douglas High School in Parkland, in the Miami metropolitan area in February, some of the survivors launched a wide-reaching social movement demanding gun reform.

Under public pressure, lawmakers in Florida passed a new law on gun control in March.

Trump initially said he supported raising the minimum age for gun purchases but later stepped away from the measure. The White House said the president had backed down because he wanted to focus on legislation that could get through Congress.

A number of major companies have cut ties with the NRA in following the shooting, including the US airlines United and Delta and car rental firms Hertz and Enterprise. Big chains such as Walmart also said they would place new restrictions on gun sales.

The man labelled a coward by US President Donald Trump for failing to confront a school shooter has denied hiding from fire. Meanwhile, gun control activists in Florida have shown no sign of backing down. (26.02.2018)