Police officers at Greek universities: The culture clash continues | Europe | News and current affairs from around the continent | DW | 27.02.2021

The Greek government has passed a controversial law aimed at stationing police on university campuses. Academics fear the move will stifle freedom of expression while supporters say it's necessary. 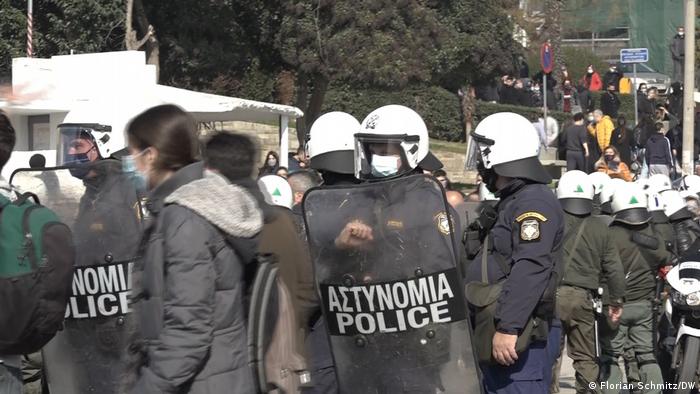 A poster hangs above the dean's office at Aristotle University in Thessaloniki. Several hundred students have occupied the building on what would otherwise be a pretty empty campus these days, if it weren't for the students and an equal number of police facing off against them. The students are protesting a recent law that would see police stationed on university campuses. The government says the move is necessary to fight crime, but students and professors say essential freedoms are at stake in a country where universities have been an important part of Greek history.

Fotini Tsibiridou is a professor at the University of Macedonia, the city's second largest university, and one of more than a thousand academics protesting the new law. "I'm afraid that a militaristic culture will be heading to campus," she said. "This doesn't fit with an environment based on liberal freedoms, open dialogue and critical thinking. When people think about police, they think about oppression and not about freedom." Her words reflect a culture war of a kind that has been raging in Greece for decades.

The occupation of Greece by Hitler's army during World War II resulted in a civil war pitting partisan left-wing insurgents in the northern part of the country against the conservative government in Athens. This engendered an irreconcilable divide that continues to this day. Professor Tsibiridou also sees the country's current problems rooted in its past. "Because of the civil war and the military junta that was in place between 1967 and 1974, people have many ugly memories when it comes to the police," she told DW.

In 1973, tanks belonging to the military government violently ended a student occupation at Athens Polytechnic, killing at least 26 people. That bloody event helped trigger the movement that brought down the military junta a year later. A law was brought in after the military dictatorship that prevented police from entering campus, creating safe havens for the politically persecuted. That law was rendered null and void in 2019, clearing the way for the stationing of police across campuses. 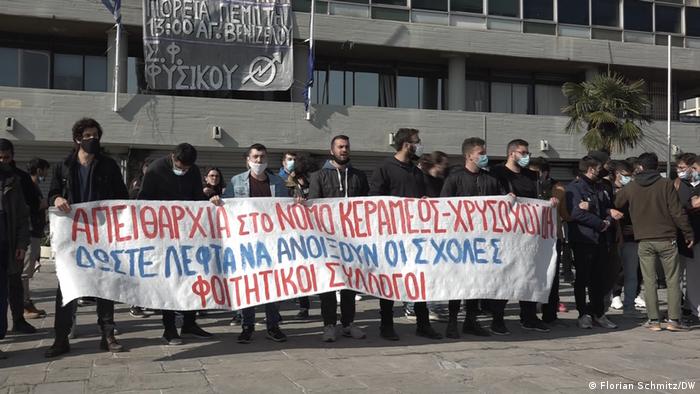 Thousands of students have been protesting against the new law

Theodoros Kallitsis doesn't understand why many are upset. He's the chairman of the conservative New Democracy Party in Greece's second largest city, Thessaloniki, which is also the seat of the country's biggest university. He stands behind the new law and dreams of the city one day becoming the cultural and economic hub of the entire Balkans. He said universities play an important role in achieving this but need to be much safer. "The job of the Greek police is to support the universities by making them safer for both students and professors," he said.

This is where he starts talking about campus crime — government property being stolen to manufacture drugs or acts of political violence by radical leftists, which do occur repeatedly.

One such attack took place in October last year when the rector of Athens University of Economics and Business was assaulted in his own office and forced to wear a sign showing solidarity with leftist squatters in Athens and Thessaloniki. That came after the conservative government of Prime Minister Kyriakos Mitsotakis cleared many of the squatters out of those buildings a year earlier by force.

Police sirens can be heard during our interview. The city center has been partially cordoned off following clashes between students and city police, who many say are far too easily provoked. Theodoros Kallitsis doesn't think so and doesn't understand the criticism. "A private campus security force will be set up that will be paid for by the police, managed by the university and the officers will not be armed," he says.

But many are not happy, since the new law allows campus security guards to stop, search and temporarily detain people, in addition to questioning them, giving them far more power than typical campus security.

Many see this as an attack on freedom itself and want to protect previous, hard fought for, university asylum rights.

The conservatives believe that more campus security will mean more learning, despite the fact that his party cut funding for public universities and refused to provide extra revenue for the coronavirus crisis. Funding for this year alone was reduced by more than 22% at universities that were already suffering from a chronic shortage of supplies and equipment. 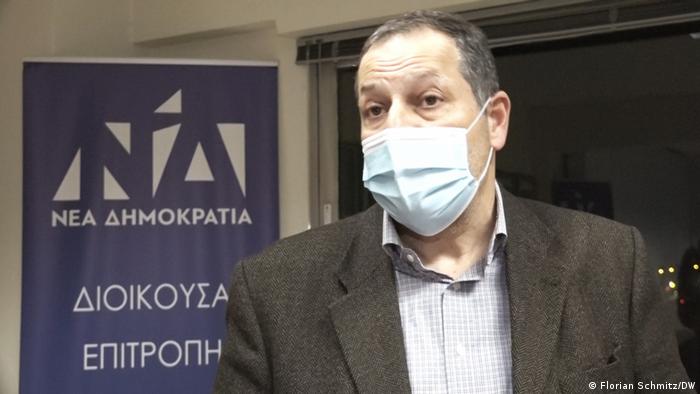 Universities around the country have since made the government a counter-offer, and are demanding private security guards on campus. Professor Tsibiridou believes that it is ironic that the same conservative prime minister who is now pushing hard for more security was the same person who — in 2013, as the minister in charge of public sector reform — decreased the number of security guards on campus to save money.

Those security guards are now dearly missed, Tsibiridou said, along with better lighting at night on campus, security doors and electronic alarm systems that would make break-ins more difficult. She says putting more police on campus is just a symbolic gesture that would only lead to more problems.

Angelos Kastanis is a political analyst and expert on security issues, and he also sees problems with stationing uniformed police on campus. "I fear that we'll constantly have conflicts between the police and students, a kind of urban warfare. Everything we're hearing in the news, from unions or from radical left-wing groups is trending in this direction. No one seems willing, in the smallest of ways, to compromise." That's why he favors university efforts aimed at stationing private security guards on campus who have been specifically trained to deal with campus issues.

What is also disconcerting, along with the timing of these changes, is the speed at which the government is initiating them. "With the coronavirus happening, the government didn't need a large majority to get the law passed. And it's a revolution," said Kastanis.

The government of neoliberal Prime Minister Kyriakos Mitsotakis has pursued a law-and-order agenda and failed to slow transmission of the coronavirus.