German police have searched the homes of a new far-right group in five German states and arrested four suspects. Prosecutors say explosives were found for intended attacks on asylum-seeker hostels and mosques. 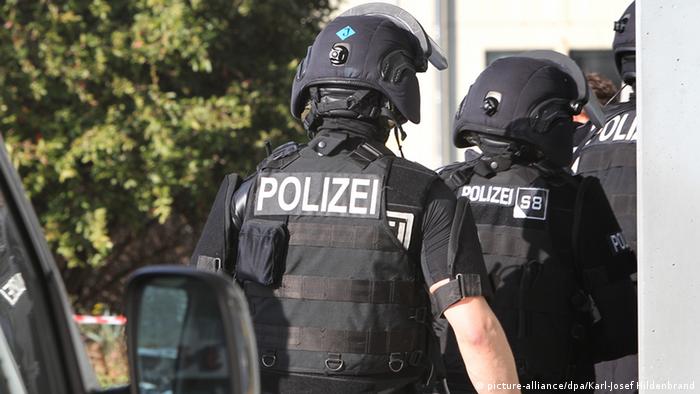 Germany's federal prosecutions office said three men and a woman, all Germans and aged between 22 and 56, were accused of forming a new terrorism organization calling itself the "Old School Society" (OSS).

The four had acquired explosives with "great power" and had intended attacks on mosques, hostels for asylum-seekers and well-known Salafists in Germany, said the prosecutions office based in Karlsruhe.

On Tuesday night, a fire caused an estimated 50,000 euros ($56,000) in damage to a hostel under construction in Limburgerhof, a small town in Germany's western state of Rhineland-Palatinate.

Local police said one or several perpetrators had set fire to rolls of bitumen roofing material. No one was injured, but a witness saw a small, black car being driven away with tires screeching.

In early April, an arson attack on a planned hostel at Tröglitz in Germany's eastern state of Saxony-Anhalt drew international attention.

At the time, Foreign Minister Frank-Walter Steinmeier said he feared it would damage Germany's image.

On Tuesday, it was widely reported that Germany's Federal Office for Migration and Refugees (BAMF) was expecting 400,000 asylum-seekers this year, double last year's count.

German Development Minister Gerd Müller said the estimate was born out by entry figures for the first quarter of 2015.

On Friday, Chancellor Angela Merkel's office in Berlin will host a special conference including representatives of Germany's municipalities and federal states.

Local bodies and the Länder are demanding more funds from the federal government to cover costs of accommodation and integration of refugees.

Throwing more money at an operation to intercept migrant boats in European waters isn't the only solution. Italian Secretary of State for European Affairs Sandro Gozi told DW that a common EU policy must be adopted. (24.04.2015)

EU Parliament and refugees: put away the violins

The EU Commission and European Parliament are marching together for new migration and refugee policies. But the member states actually make the decisions, and until now, they have blocked all reforms. (29.04.2015)