German police have arrested a 16-year-old Afghan friend of the German-Iranian gunman who killed nine people in Munich on Friday. There is suspicion he may have been an accomplice and failed to report the gunman's plans. 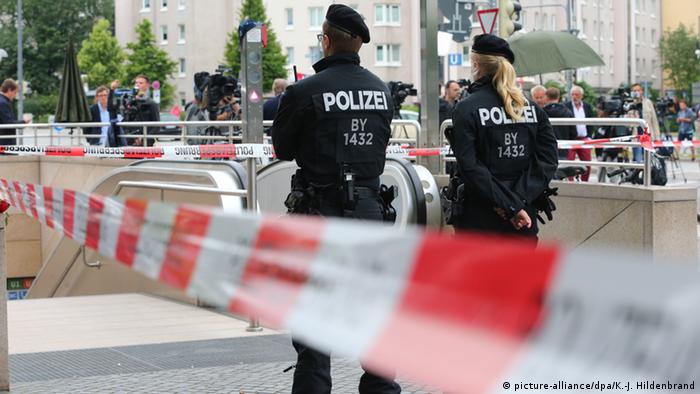 The 16-year-old Afghan youth has been arrested for possibly having failed to report the plans of the gunman, according to a police statement issued on Sunday.

"There is a suspicion that the 16-year-old is a possible tacit accomplice to [Friday's] attack," police said in a statement. "We suspect that this boy aged 16 years could have been aware of the act."

The youth, who can not be named under German rules for reporting acts of this nature, was arrested in a Munich apartment at 6:15 p.m. local time on Sunday.

He had voluntarily reported to a police station on Friday and was questioned about his relationship to his friend, the 18-year-old German-Iranian who carried out the shooting.

Police investigations on Saturday revealed contradictions in the 16-year-old's statement, leading to suspicions that he was a possible accomplice to Friday's attack. A warrant was issued for his arrest on the grounds of suspicion of failure to report an offense.

The 16-year-old may have been involved in posting a Facebook call for a meeting in a cinema complex near Munich's main train station.

The police ended their statement by saying they would use all available means to prevent individuals associating themselves with criminal acts. They warned against attempts at further, copycat crimes in which people could be put in danger. Police action would be taken, with the perpetrator facing the full penalty of the law, the statement concluded.

Germany's coalition government has promised to seek whatever legal means necessary to prevent another mass shooting. But if the weapon was acquired illegally, stricter controls on gun purchases may not be the answer. (24.07.2016)

Thousands of people have taken to the streets of Munich to pay tribute to the victims of Friday's mass shooting. Makeshift memorials have sprung up, but many mourners just want to do their public grieving in peace. (23.07.2016)

Fifteen victims of a high school shooting 7 years ago have been remembered in Winnenden, a southern German town. The father of the deceased 17-year-old shooter is suing a psychiatric clinic, saying it failed to warn him. (11.03.2016)

Earlier Sunday, Bavarian police chief Robert Heimberger told a press conference that the 18-year-old gunman behind the shooting spree "had been preparing for a year."

Heimberger said the German-Iranian teen, identified only as David S., had visited the site of a 2009 school shooting in the southwest German town of Winnenden and took photographs. Material found at the shooter's home showed he had likely obtained his Glock 17 pistol illegally through the internet's "dark net" market, and was an avid player of first-person shooter video games like "Counter-Strike."

On Sunday, authorities raised the number of injured people from two dozen to 35.

Most of the dead were teenagers, and six had a non-German background, police said. Prosecutor Thomas Steinkraus-Koch told journalists on Sunday that investigators had concluded the gunman had chosen his victims randomly and did not appear to be motivated by a political ideology.

"It is not the case that he deliberately selected" the people who he shot, he said. He also revealed that the teenager had spent two months in a closed psychiatric ward in 2015 and received treatment for social phobias and anxiety.

Officials have ruled out any connection to extremist group "Islamic State," which has claimed responsibility for recent attacks in Paris and Belgium. However, they have pointed to an "obvious link" between Friday's killings and the massacre of 77 people by white supremacist Anders Behring Breivik in Norway in 2011.

Breivik's attack took place five years to the day before the Munich shooting. Bavaria's interior minister said a copy of Breivik's manifesto had been discovered on the 18-year-old's computer.