Munich mourns victims of mass shooting at Olympia mall | Germany| News and in-depth reporting from Berlin and beyond | DW | 23.07.2016

Thousands of people have taken to the streets of Munich to pay tribute to the victims of Friday's mass shooting. Makeshift memorials have sprung up, but many mourners just want to do their public grieving in peace. 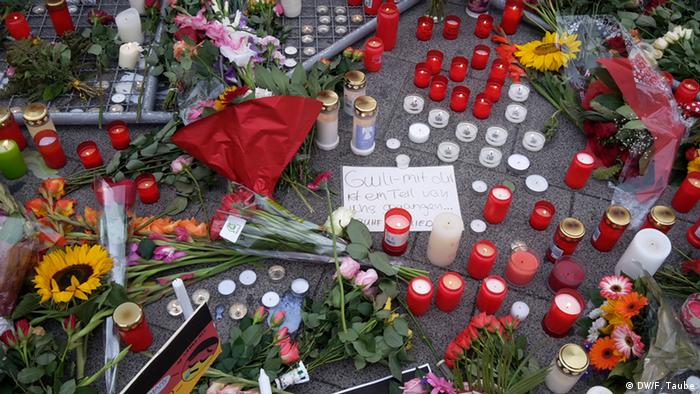 Parents are hugging young children who ask hard questions, candles and flowers are being placed at an improvised memorial outside of the Olympia shopping center, and for many locals the familiarity of the crime scene is just leading to further despair.

"We go to school not far away from here," 14-year-old Kristina said. "We meet here all the time to have ice cream or just to hang out with friends. This place will never look the same again."

Kristina didn't witness the attack, but she choked up talking about it a few meters away from an impromptu memorial that has grown bigger and bigger since 10 people including the gunman died on Friday.

Jens Mayer, a 28-year-old from Ingolstadt, witnessed the attack while he was working in the local branch of the Saturn electronics chain. He hurt his hand climbing a fence as he was running away from the shots.

"A family that saw me running took me to their home, and I spent the night there," Mayer told DW. "I was treated for my injury, and I am free to go home, but it all felt like a movie or a video game. It seems so unrealistic." 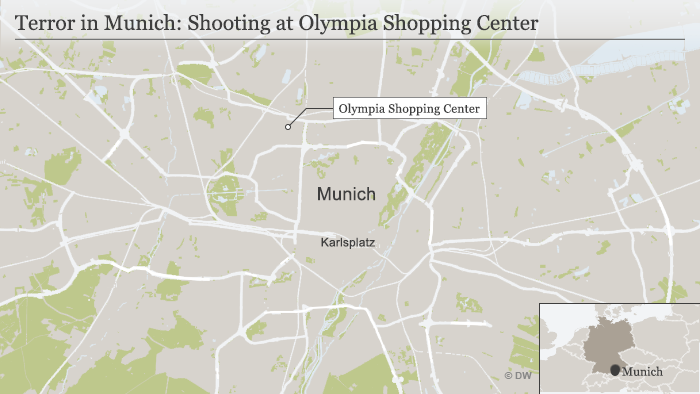 Like many at the memorial site, Mayer said he was not afraid after Friday's shooting, but he had been disturbed by it.

"I don't know if my life will be different now," Mayer said. "I hope not. But maybe now I will not take a train without pepper spray, for example. I want my life to stay the same, but who knows."

Nadine Zweinger, who lives near Olympia, said she had left the shopping center just minutes before the attack took place and was sitting at home in the garden with her three daughters when she suddenly heard the shots.

Zweinger said she could see the police in the street. "They came into the garden and into the house, asked us to stay away from the windows," she said.

"My daughter was very scared, so we tried to explain to her what was happening," Zweinger said. "At 1:30 we saw that the attacker was killed, so this calmed us down a little bit. But it was still a hectic night."

Zweinger said police, "acting quickly and professionally," had made her feel safe and secure, but added that the situation was "still incomprehensible. So many bad things have happened so fast and in such short time: Istanbul, Nice, Würzburg - this is actually frightening."

Many near the Olympia seemed eager to talk about what they went through during the night of the shooting, sharing their experiences with strangers who happened to be at the scene at the same time.

Others asked to be left alone with their grief; some just wanted to sit there quietly and remember the victims, who were mostly teenagers, as was the shooter. "Can we continue to go to parties as usual? Can we meet here again with our friends tomorrow?" 18-year-old Hank Wolf wondered. "Any moment something like this could happen again."

"The shooter was my age," Wolf told DW. "He could have been someone I knew. I'm not sure what to feel at the moment. All I know is that I'm very sad."