Police currently believe that an 18-year-old German-Iranian acted alone, killing nine people and then himself. They have not yet identified a motive; the man had no criminal record. Munich spent hours under lockdown.

The shooter killed nine people then himself, and also injured at least 16 more on Friday in Munich. Police said it was too early to comment on a possible motive, but added they believed the shooter to be a young German-Iranian resident of Munich, who had lived there "for a long time." He had no criminal record.

The shooter opened fire near a fast-food restaurant and then again at the nearby Olympia shopping center in the north of the Bavarian capital, just before 6 p.m. local time (1600 UTC). He subsequently fled the scene, prompting a city-wide manhunt and state of emergency. 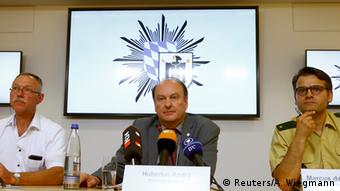 Police at one point engaged and shot at him, only for him to escape. They later found him dead, killed by a self-inflicted gunshot. The corpse was roughly one kilometer (just over half-a-mile) from the scene of the initial shooting.

The city was in lockdown for hours; 2,300 emergency services personnel were mobilized, public transport was suspended until the early hours of Saturday, the main train station evacuated.

In a late-night press conference, shortly after police cautiously announced the all-clear, Munich police chief Hubertus Andrä described the operation as "without doubt my most difficult day" in the role.

Tweets, Facebook Live and Periscope feeds can offer useful insights into breaking news events, but if they are not used carefully, they can turn already tense moments into downright panic. (23.07.2016)

"Three youngsters" were among the dead, Andrä said, while children were also among the injured.

"The motive, and the background of the crime are still totally unclear, the investigators are working full tilt and will continue into the night," Andrä said, adding that the process should move relatively quickly, as police were confident that they had identified the suspect. Defining whether the shooting was a case of somebody running amok, or an act of terror, would require more information on a possible motive, he said.

Andrä said the suspect used a "pistol," contradicting earlier reports of a suspect or suspects on the loose with larger weapons.

For a time, police had worked on the assumption of "up to three" shooters; Andrä said that eyewitness reports forced police to presume that more than one person was involved. Two people had left the scene at speed in a car, prompting suspicion, but police investigated them: "They have nothing to do with the incident," police chief Andrä said.

Several other unsubstantiated rumors punctuated a chaotic evening in Munich, including multiple reports of secondary shootings at key sites in the city, which proved not to be true. Similarly, conflicting reports on the shooter, what he was wearing, and what he might have said at the scene were circulated.

On Saturday, police commandos conducted an early morning raid on an apartment in the city's Maxvorstadt neighborhood, where local media said the gunman lived with his parents.

Officials have yet to confirm whether the raid was connected to the attacker.

Interior Minister Thomas de Maiziere, holidaying in New York, departed for Germany on hearing the news. Bavaria's cabinet was to convene for an emergency meeting early on Saturday. Police in Munich announced another press conference to update on the investigation's progress for midday local time.

Peter Altmaier, who heads up Angela Merkel's chancellery, appeared on public ARD television on Friday night, saying the chancellor was being regularly updated on developments. Merkel did not comment herself. Social Democrat Deputy Chancellor Sigmar Gabriel appealed on Twitter for people not to speculate or jump to conclusions, calling the attack "shocking" and praising Munich's police effort.

Some 2,300 police officers mobilized on Friday night, including forces from neighboring states Baden-Württemberg and Hesse, as well as the German federal police's elite GSG9 units, and members of Austria's elite Cobra forces.

The attack came at an already tense time in Bavaria, four days after a young Afghan asylum seeker attacked several people with a knife and an ax on a local train near Würzburg. He killed no one but injured several. Investigators later found a hand-drawn version of the so-called "Islamic State" flag in the boy's room. He had come to Germany as an asylum seeker, and seemed to be integrating better than most, having secured an internship at a local bakery.

In this young man's case, police believe that he radicalized in just a matter of days before carrying out his somewhat crude attack.