Polar ice sheets melting faster than ever | Environment | All topics from climate change to conservation | DW | 04.02.2013

The polar ice caps have melted faster in last 20 years than in the last 10,000. A comprehensive satellite study confirms that the melting ice caps are raising sea levels at an accelerating rate. 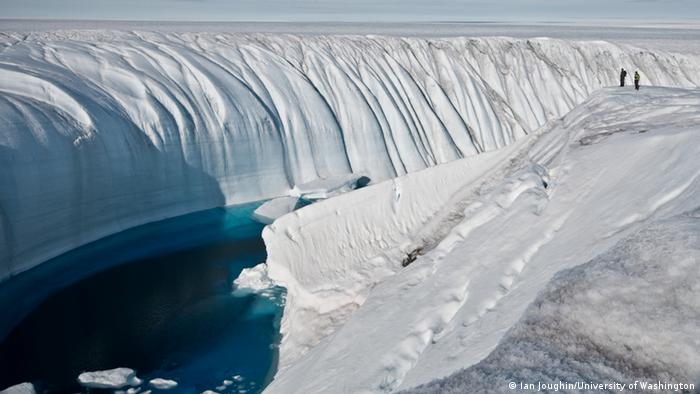 The polar regions are important drivers of the world's climate. When the "everlasting ice" melts at an increasing rate, the rest of the world is affected. Global sea levels are rising, dark meltwater pools absorb warmth from the sun which white ice would reflect back into space. Fresh water flows into the sea, changing ocean currents and the living conditions for marine organisms.

For 20 years satellites have been monitoring earth's biggest ice shields on Greenland and in the Antarctic, using different technologies from radar to gravity measurements. In the past, the uncoordinated publication of individual one-off measurements led to confusion, especially with regard to the state of the Antarctic ice. A new study, supported by NASA and European Space Agency ESA combines the data from different satellite missions. 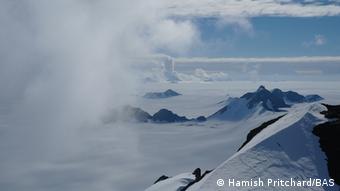 The Antartic is difficult terrain for scientists to access

"It's the first time all the people who have estimated changes in the size of the Antarctic and Greenland ice sheets using satellites over the past 20 years have got together to produce a single result," Andrew Shepherd from the University of Leeds in the UK explained in an interview with DW.

"Thanks to the accuracy of our data set, we are now able to say with confidence that Antarctica has lost ice for the whole of the past 20 years. In addition to the relative proportions of ice that have been lost in the northern and southern hemispheres, we can also see there's been a definitive acceleration of ice loss in last 20 years. So together Antarctica and Greenland are now contributing three times as much ice to sea levels as they were 20 years ago," says the Professor of Earth Observation.

According to the study, melting ice from both poles has been responsible for a fifth of the global rise in sea levels since 1992, 11 millimeters in all. The rest was caused by the thermal expansion of the warming ocean, the melting of mountain glaciers, small Arctic ice caps and groundwater mining. The share of the polar ice melt, however, is rising. 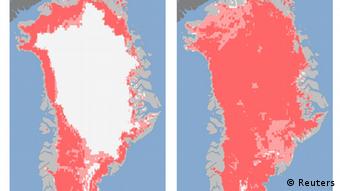 Satellite photos track ice loss, as shown in these images of Greenland

The pattern of change differs considerably between the Arctic and the Antarctic. Two thirds of the ice loss is happening in Greenland. "The rate of ice loss from Greenland has increased almost five-fold since the mid-1990s", says Erik Ivins, who coordinated the project for NASA.

Although the Greenland ice sheet is only about one tenth the size of Antarctica, today it is contributing twice as much ice to sea levels, according to Shepherd: "It's certainly the larger player, probably just because it is at a more equatorial latitude, further from the North pole than Antarctica from the South pole." The ice on Greenland is also melting on the surface, because of increasing air temperatures.

Different conditions within the Antarctic

In the Antarctic, the situation is a more complex one. Scientists distinguish between the West and East, which are being affected differently by climate change. West Antarctica is losing ice at an accelerating rate. Many of the region's glaciers are by the sea, which is warming. It is only to be expected that the ice is melting faster here, says Shepherd. 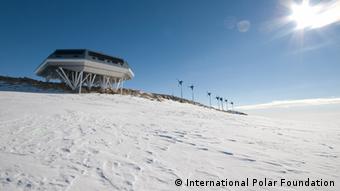 In the huge area of East Antartica, the ice is mostly above sea level, Shepherd explains. The air temperature is also much lower, and the experts do not expect the ice to melt on account of rising temperatures. In this part of Antarctica, the ice sheet is actually growing as a consequence of increased snowfall. This has led some critics to question the global warming theory. However for Shepherd and his colleagues, the changes are all consistent with patterns of climate warming, which leads to more evaporation from the oceans and in turn more precipitation, which falls as snow on the ice sheets.

20 years of satellites – too short to tell? 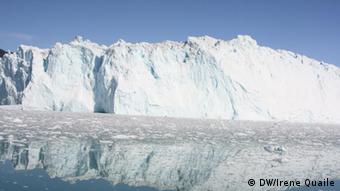 If the Greenland ice sheet were to melt completely, sea levels could rise by seven meters

"20 years is a very short time-scale to draw conclusions about climate change. "We are just beginning an observational record for ice," said co-author of the study Ian Joughlin, a glaciologist at the University of Washington. "This creates a new long-term data set that will increase as new measurements are made."

But the scientists are convinced the relatively new technology is the best way to keep track of climate change in inaccessible polar regions. Earth observation expert Shepherd is sure global warming is the only possible explanation for the accelerating polar ice melt. He sees especially the rapid melt in West Antarctica as a signal and a result of direct changes in the local balance between the ice sheet, the ocean and the atmosphere.

If the west Antarctic ice sheet should become unstable, it could trigger abrupt changes globally. Joughlin sees the recent ice activity in the region as a reason to pay attention, but not to panic.

Key data for the IPCC

In the last report by the IPCC (Intergovernmental Panel on Climate Change), the development of the ice sheets was regarded as the major unknown factor with regard to predicting future sea level rises. "The results of this study will be invaluable in informing the IPCC as it completes the writing of its Fifth Assessment Report next year," according to Tom Wagner, NASA's cryosphere program manager in Washington.

The question of how the satellite data will influence predictions of sea level rise is not easy to answer, says Andrew Shepherd: Any model is only as reliable as its data. He hopes the more accurate satellite measurements will help improve the models. He does, however, have one reservation. The main uncertainty in climate projections is not to do with the physics or processes, the scientist says. It is the uncertainty as to what emissions scenarios nations will adopt in the future.