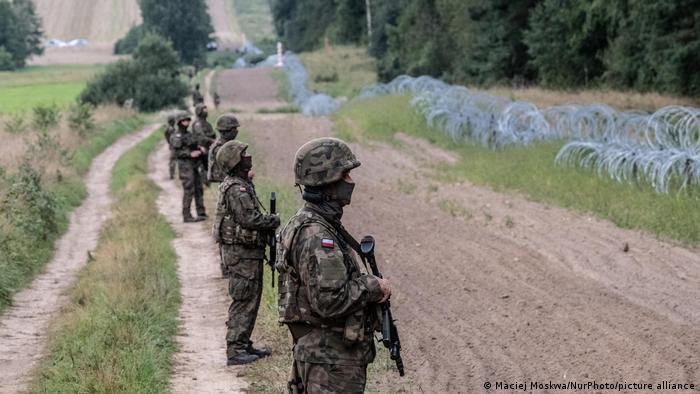 It is the third time in the past month that the ministry has summoned Chesnovsky regarding the situation on Poland and the EU's eastern border with Belarus.

Poland is an EU member state and is facing considerable pressure, along with Lithuania and to a lesser extent Latvia, as Belarus has encouraged migrants — most of whom come from Iraq, and some from Afghanistan and elsewhere — to use Minsk as a transit point on their way to the European Union.

'Enough to assume it was not a mistake'

Stanislaw Zaryn, the spokesman for Poland's security services, said that, after crossing approximately 300 meters (990 feet), the Belarusian personnel were confronted by a Polish patrol. The Belarusians "reloaded their weapons and then departed," Zaryn said, adding, "It was enough to assume it was not a mistake."

During the meeting, Piotr Wawrzyk, a deputy foreign minister, said: "The actions taken by the Belarusian authorities in recent weeks have the increasingly evident hallmarks of a deliberate escalation."

Zaryn told The Associated Press that there has been a "series of incidents and provocations organized by Belarusians, but this was the most dangerous incident so far."

Belarusian forces have in the past pointed their guns in the air and fired blanks when they have encountered Polish soldiers or guards and have destroyed a razor-wire barrier at the border or encouraged migrants to do so.

A new front in the long-simmering hybrid war

Warsaw and the European Commission call the effort by Belarusian President Alexander Lukashenko to flood the EU's eastern borders with migrants part of a hybrid war strategy being waged in retaliation for sanctions against his regime following the contested August 2020 presidential election. Lukashenko is backed by Russian President Vladimir Putin.

Peter Stano, the European Commission spokesman, told AP that the latest territorial intrusion into Poland, if confirmed, "would be yet another provocation from the side of (the) Lukashenko regime against the European Union and its member states."