Poland's parliament is set to vote on a law banning Pride parades and other public gestures in support of LGBTQ rights on Friday, a day after an emotional debate on the issue. 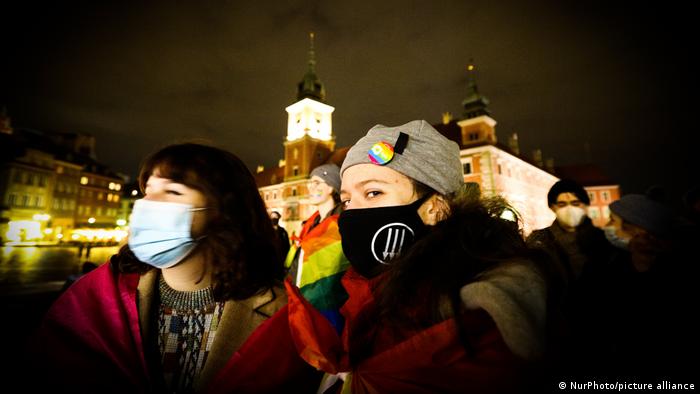 Poland's parliament is set to vote on a law banning Pride parades and other public gestures in support of LGBTQ rights on Friday, a day after an emotional debate on the issue.

Krzysztof Kasprzak, one of the activists who presented the bill, began his speech by calling the LGBT rights movement a form of totalitarianism and comparing it to Nazism. He accused the movement of seeking "to overthrow the natural order and introduce terror.''

The speech was slammed as the "most disgusting speech" by Wlodzimierz Czarzasty, a left-wing deputy speaker of parliament. He was joined by a number of opposition legislators, from the left, center and even the conservative group, who called the proposed legislation inhumane, homophobic, or in violation of the right to assembly guaranteed in the country's constitution.

It remains unclear if the proposal had the backing to move forward.

Hundreds of people took to the streets of the Polish capital to protest against the bill. More than 300 people gathered outside the parliament in Warsaw, waving rainbow flags and holding banners that read: "Love knows no gender."

What is the bill about?

The bill would modify Poles' right to free assembly and undoubtedly place Poland in a fresh conflict with the EU, which is already concerned about judicial independence in the country as well as a Polish Constitutional Court ruling declaring Polish law supersedes EU law.

The amendment to the right of assembly stipulates that going forward public gatherings may not "question marriage as a relationship between a woman and a man" or "propagate the extension of marriage to persons of the same sex." Demonstrations such as Pride parades would be banned because they promote "sexual orientation other than heterosexual."

Where did the proposal originate?

It is unclear how seriously the 460 legislators in the Sejm, Poland's lower house of parliament, will treat the bill given that it originated from an outside pressure group, the conservative anti-abortion rights Life and Family Foundation.

The group successfully gathered 140,000 signatures to propel the legislation forward. Under Polish law, citizens who gather 100,000 signatures from eligible voters can force a reading of a bill in the parliament.

The All-Poland Women's Strike movement which led protests against fresh abortion restrictions last year has called for protests outside the parliament under the auspices of a "Hate-Free Zone."

Many politicians in the ruling Law and Justice Party, including the president, have campaigned against the rights of the LGBTQ community.

Two years ago, several communities and regions in Poland have declared themselves to be "LGBT ideology free zones." However, recently some places have rescinded this status as the EU withheld funding citing the discriminatory nature of the designation.

Amnesty International's Nils Muiznieks called on Polish lawmakers "to recognize that love is love, and reject this hateful proposal which is discriminatory to its core."

Muiznieks added, "This initiative may not have originated with the Polish government, but let us be clear: the government's normalization of hateful rhetoric has created an environment in which people feel empowered to spew bigotry."