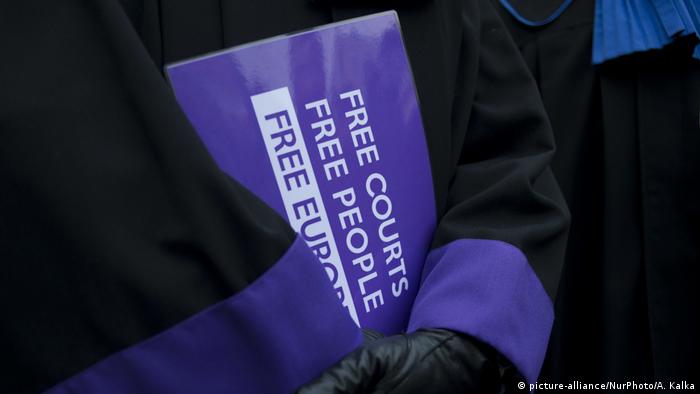 The independent Polish judges' association Iustitia published a report on Saturday listing the names of dozens of judges and prosecutors who have faced disciplinary measures for criticizing the government's judicial system.

The over 200-page report outlined the measures taken against prosecutors and judges between 2015 and 2019 after the ruling right-wing Law and Justice (PiS) party took power.

Some 34 judges faced "harsh reprisals" while 36 prosecutors were also disciplined over their remarks.

In several cases, judges and prosecutors were moved to lower courts, demoted, had cases taken away and told to appear before disciplinary panels.

The disciplinary actions took place after the prosecutors and judges criticized, questioned or appeared to negatively comment on the controversial reforms.

According to the Iustitia report, judges have been targeted for over public statements that they made, asking the European Court of Justice for a preliminary ruling, or "putting on a T-shirt with the inscription 'Constitution.'"

Poland's government was quick to reject the content of the report. Deputy Justice Minister Michal Wojcik called the findings an "unprecedented attack" and criticized the judges' association as a "very politically engaged group."

Around 3,500 of Poland's 10,000 judges are members of Iustitia, which describes itself as independent and apolitical.

Poland recently adopted a controversial law that allows judges to be disciplined for questioning the government's reforms.

Judges now face fines or could lose their jobs if they are seen as politically active or if they do not recognize the authority of newly-appointed judges.

Poland's PiS defended the reforms that it has implemented since 2016, saying they are intended to make the justice system more efficient and to tackle corruption.

The European Union, top European judicial bodies, as well as lawyers and judges in Poland say that the changes are curbing judicial independence in Poland as well as the jeopardizing the country's system of checks and balances.

Thousands of protesters took to the streets in Poland to oppose planned legislation that would allow the government to impose control over the judiciary. The controversial law could affect Poland's EU membership. (18.12.2019)