The Polish government has not brought into effect a contested ruling that would further restrict abortion in the country. Thousands rallied against the court's verdict which was expected to be enforced on November 2. 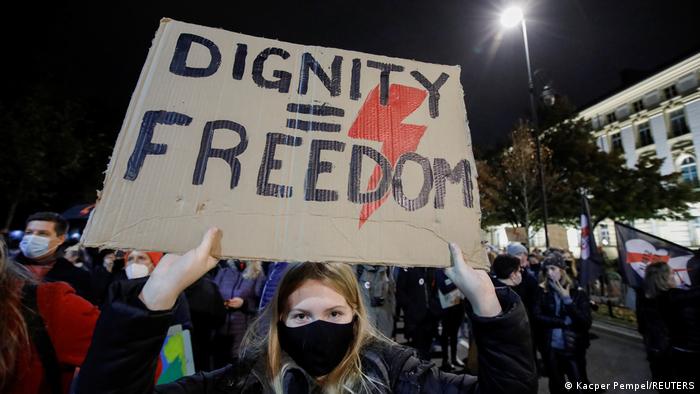 Poland's right-wing government has delayed the implementation of the controversial constitutional court ruling that tightened abortion laws and sparked widespread protests in the largely Catholic nation.

A government official on Tuesday said the country needed a period of calm to discuss the court's ruling, which was expected to take effect on Monday.

"There is a discussion going on, and it would be good to take some time for dialogue and for finding a new position in this situation that is difficult and stirs high emotions," said Michal Dworczyk, the top aide of Polish Prime Minister Mateusz Morawiecki.

The prime minister has appealed for talks with the protesters and opposition lawmakers to find a solution to the issue.

The constitutional court's ruling on October 22 banned termination due to fetal congenital defects, further restricting what was already one of Europe's strictest abortion laws.

This would leave abortions legal only in cases of rape, incest, and when the woman's life is in danger.

The court's verdict was to be enforced from November 2, but since the ruling has not been published in the government's official gazette, it does not have legal power.

The ruling was met with nationwide protests that carried on for nearly two weeks despite a ban on gatherings of more than five people, intended to curb the spread of the coronavirus infections.

What started as abortion rights protests soon snowballed into massive demonstrations against the nationalist Law and Justice (PiS) government, its church allies, and its traditionalist policies.

Tens of thousands of protesters have taken to the streets in Warsaw and other cities across Poland in the days following the ruling.

The naked protest "relates directly to the fight for women's rights, for human rights, for people to be treated in a dignified way," said Jadwiga, an activist present at the scene.

Thousands of activists have defied coronavirus restrictions to demonstrate for a ninth straight day against a ruling that further limits abortion in the Catholic country. Groups of hooligans tried to disrupt the event.

Poland has virtually banned abortion, and the United States is also looking at tightening restrictions. But other countries, like Thailand and Benin, have started to loosen their restrictive measures. An overview.

Tens of thousands of demonstrators took to the streets after the death of a 30-year-old pregnant woman. Activists have said she lost her life because of Poland's near-total ban on abortion.