The Polish government has said closing the Turow lignite mine would result in the layoff of thousands of workers and cutting power to millions of homes. It says the Czech Republic and Germany still operate lignite mines. 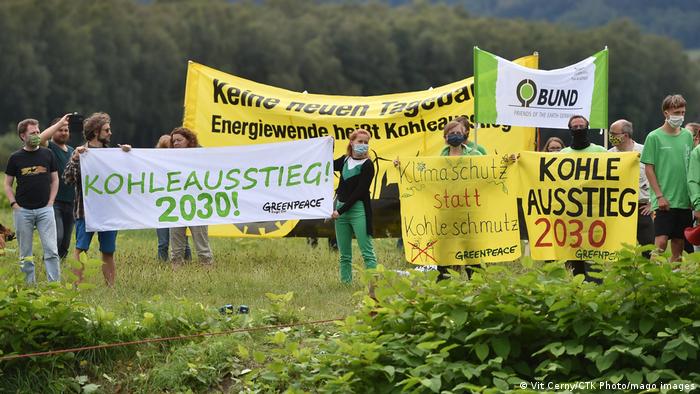 Hundreds of people from the Czech Republic, Germany and Poland protested against the planned extension of the Polish Turow lignite mine last year

Poland on Monday defied an injunction by the European Union's top court that had ordered the immediate shut down of a major lignite mine in the border town of Turow.

The mine and connected power plant, located on the border with Germany and the Czech Republic, generates about 7% of Poland's energy.

Gowin said that the closure of the mine would also lead to a "loss of tens of thousands of jobs." He added that Poland is focusing efforts on "very intensive diplomatic and law-related efforts" to continue operations at Turow.

The EU court had ordered Poland to halt lignite mining at Turow on Friday after the Czech government had sought an end to its mining activities.

Prague filed a lawsuit in February, saying Warsaw had violated EU law by extending mining at Turow until 2026.

In a statement, the EU court declared: "It appears sufficiently likely that the continuation of lignite mining activities at the Turow mine before the final judgment is delivered is likely to have negative effects on the level of groundwater in Czech territory."

"Therefore, we will not only counteract with all our strength this wrongful, unfair and unexpected decision … I am convinced that we will be able to prove our point," he added.

Morawiecki noted that both the Czech Republic and Germany are operating lignite mines and power plants near to Poland's borders.

The prime minister was holding an emergency meeting with regional authorities and the managers of state energy company PGE, which runs the mine and the plant.

Closing the mine and plant would result in costs of around 13.5 billion zlotys ($3.6 billion, €3 billion), PGE deputy head Pawel Sliwa told an emergency meeting of a parliamentary commission.

Coal makes up 65% of Poland's energy sources, including 17% from lignite, while about 25% of the nation's energy comes from renewable sources.

The International Energy Agency says in a new report that ending investment in new coal, oil and gas development is crucial to reaching ambitious climate targets by 2050.