Poland comes to terms with war-time massacres of Jewish citizens | Europe| News and current affairs from around the continent | DW | 12.07.2011

Ceremonies are taking place in Poland this week to mark the 70th anniversary of a series of massacres committed by Poles against their Jewish neighbors during World War II. But some groups are still in denial. 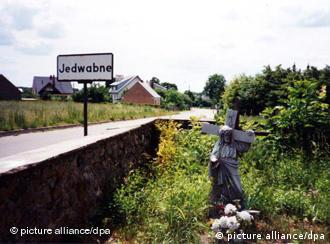 A ceremony in the eastern town of Jedwabne, Poland, on Sunday marked one of the darkest chapters in the nation's history. Leading Polish politicians, the Israeli ambassador to Poland and the country's chief rabbi were joined for the first time by a Polish Roman Catholic bishop on the site where Polish villagers turned on and massacred their Jewish neighbors during the World War II.

The Soviets occupied the area when war broke out in 1939. After the Nazis attacked the USSR two years later, confusion and mayhem gripped Jedwabne. Historians estimate that the massacre of Jews took place in over 50 places in the region in July 1941, killing thousands.

Jacob Baker survived the massacre and emigrated to the US before the war. In a film documenting the Jedwabne massacre, he said he can still remember the cries of Jewish villagers being killed by their neighbors.

"It was the most horrible day, because people were dragged out of their houses: men, women, infants, children," Baker said in the film.

"They were beaten and blood was shed. In the barn they were locked up, and they spilled gasoline from the roof. This scream was terrible. This cry should be heard even after their death."

"The cries of terror coming from the barn haven't gone silent, although decades have elapsed since that tragic day," Mazowiecki said. 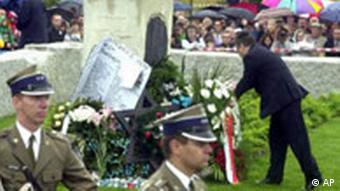 "Those guilty of the crime disgraced themselves in the eyes of other Poles when they raised their hand against their Jewish compatriots."

The exact number of those who died during the massacre remains a point of contention among researchers. Even in the best documented Jedwabne pogrom, the numbers vary from 300 to 1,000.

Although the presence of a high-ranking member of the Polish Roman Catholic episcopate indicates that at least the church is coming to terms with the truth, many of the country's conservative and nationalist circles remain in denial about Jedwabne and similar events.

A series of publications have come out that question the specific findings of those documenting the massacres, while those pursuing such research have been branded unpatriotic. Polish-American historian Jan Gross, who revealed new evidence about Jedwabne in 2001, believes it will take time for ordinary Polish citizens to accept the extent to which some Poles participated in war crimes.

"This narrative is very difficult to fit into the narrative of Polish history during the war, which is a history of being victims essentially, victims in the hands of the Nazis," Gross told Deutsche Welle.

Gross' research marked a turning point in research on the massacre and for the first time suggested that it was the Poles rather than the Nazi occupiers who were responsible. Although the Nazis' role in the atrocities in Jedwabne is still up for historical debate, Gross attests that they were passive observers rather than participants.

"As a result, it is a story that stands as an exemplification of horrible social disorganization and demoralization that takes place during the war and this tremendous violence which is meted out by everybody against everybody."

Poland is lagging behind most Eastern and Central European countries when it comes to compensating Jews for property confiscated by the Nazis during World War II. (18.03.2011)

Mass graves with victims of the Holocaust remain undiscovered in Belarus, Poland, Russia and Ukraine. A new campaign aims to find and identify the graves of hundreds of anonymous victims and give them a proper memorial. (25.01.2011)

Poland marks 70th anniversary of massacres of Jews by Poles