Poland: Building blown up to cover up murder?

A gas cylinder explosion was initially considered to have caused the building to collapse. Five people were killed and 21 injured in the incident in Poznan. 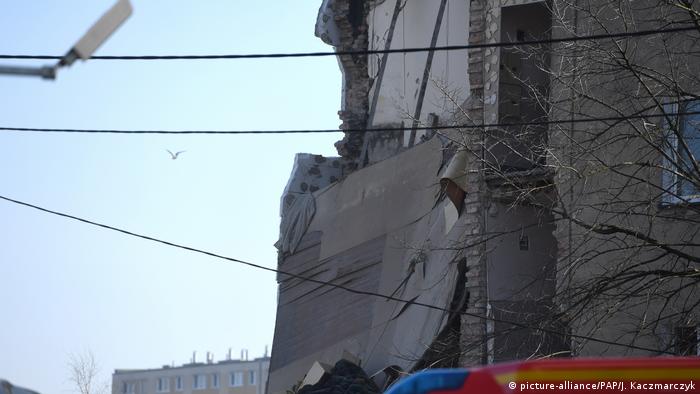 An apartment building in Poznan could have been brought down to cover up a murder, prosecutors in Poland said on Monday.

The building with 18 apartments collapsed early Sunday, leaving five people dead and 21 injured. The explosion of a gas cylinder was considered to be a possible reason.

Polish news agency PAP reported on Monday that investigators were almost 100 percent certain that explosives might have been used to cover up the the murder of a woman.

Magdalena Mazur-Prus, a spokeswoman for the regional prosecutors' office, did not confirm the PAP report. But she did not deny that the building could have faced an "intentional" attack.

Citing anonymous sources, the news outlet wPolityce.pl said that a woman had been decapitated some time before the incident took place.

The European Commission took Poland to court in 2015, saying the country had failed to rein in air pollution. The court also noted that Poland's plans to meet EU air quality standards were not effective enough. (22.02.2018)

A Polish NGO has said it filed a complaint against Argentine daily Pagina 12 over its coverage of the Jedwabne pogrom. It appears to be the first legal action under Poland's controversial "Holocaust bill." (04.03.2018)