A Polish NGO has said it filed a complaint against Argentine daily Pagina 12 over its coverage of the Jedwabne pogrom. It appears to be the first legal action under Poland's controversial "Holocaust law." 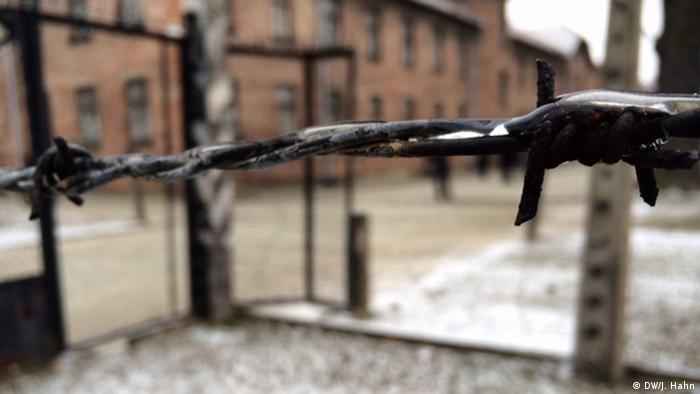 Polish lawmakers from the ruling Law and Justice (PiS) party welcomed what appeared to be the first case filed under a law that makes it illegal to suggest that Poles were complicit in the murder of Jews during World War II.

The Polish League Against Defamation, a nongovernmental group that campaigns to protect Poland's reputation abroad, said it filed a complaint against the Argentine daily Pagina 12 on Friday, the day after the new law came into effect.

The newspaper's website was accused of using a picture of "doomed soldiers" in an article on the 1941 Jedwabne pogrom, in which Poles collaborated with Nazi occupiers in the massacre of about 350 Jews, according to researchers.

"The combination of these two threads — information about the crime on Jews in Jedwabne during the German occupation and the presentation of fallen soldiers of the independence underground — is manipulation, an act to the detriment of the Polish nation," the league's statement charged.

The anti-communist doomed soldiers are widely regarded as national heroes in Poland for standing up against Soviet domination. However, records appear to show that some of them also led the killing of Jews, Belarusians and other minorities.

Pagina 12 published an article on its website on Saturday evening stating that it had not received "any legal communication and only learned of the information through international news agency reports."

"If successful, this attempt at international censorship could threaten freedom of expression worldwide," the article continued.

Poland's Deputy Justice Minister Michal Wojcik welcomed the lawsuit against Pagina 12, saying he hoped the case would go before the courts.

"The organization has a right to submit such a notice," Wojcik told Polish broadcaster Zet.

"If the court decides the complaint is admissible — and it should do so — then there will be a court case."

Under the law, anyone found guilty of ascribing "responsibility or co-responsibility to the Polish nation or state for crimes committed by the German Third Reich" could face up to three years in prison.

PiS Lawmakers say the bill aims to protect Poland from slander. However, critics have warned that it risks skewing historic research and suppressing free speech.

Meanwhile, the Israeli government has said fears the legislation could lead to Holocaust survivors being persecuted for their testimony, should it involve Poles either killing or giving up Jews to the Nazis. The law has opened up an unprecedented diplomatic row between the two countries.

While thousands of Poles risked their lives to protect the country's Jewish population from Nazi occupation forces during the war, research published since the collapse of communism has questioned national narratives.

Roughly half of the 6 million Jews murdered during the Holocaust lived in pre-war Poland. Around 3 million non-Jews died also died during Nazi Germany's six-year occupation of Poland.