Podemos rallies Spaniards with anti-austerity message | Europe | News and current affairs from around the continent | DW | 31.01.2015

Spain's upstart leftist party drew tens of thousands of supporters to central Madrid on Saturday. In just one year, it has gone from nothing to a serious contender in the upcoming vote. Guy Hedgecoe reports from Madrid. 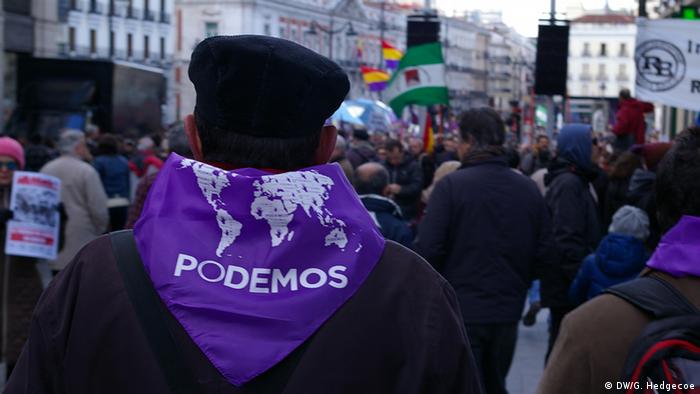 Angel Lopez strode through the back streets of Madrid with a group of friends, towards Puerta del Sol, the city's massive central square. Like tens of thousands of others this Saturday, they took part in the "March for Change," a demonstration organized by Podemos, the upstart political party which has taken Spanish politics by storm over the last year.

Saturday's event is the first time Podemos has gathered so many supporters, and Lopez believes it could be the beginning of the end for what he calls Spain's "pseudo-democracy."

"Podemos is our last hope," said the 61-year-old civil servant. "People of my age believe that the only way of ensuring that this corrupt system changes is through a new force that has the support of the grassroots." 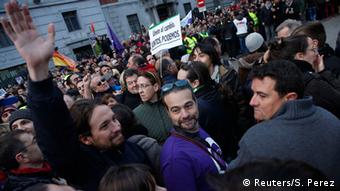 Iglesias: "Austerity policies have divided our country in two"

Minutes later, Lopez arrived in Puerta del Sol for the culmination of the march, which saw a total of 100,000 people filling the square and surrounding streets, according to the police. Many demonstrators were brandishing the trademark purple flag of Podemos, or chanting its adopted slogan: "Si se puede" (or "Yes we can").

Founded by a group of academics just a year ago, Podemos has transformed Spain's political landscape. Last May, it scooped 1.2 million votes in the EU elections, earning five seats in the European Parliament. Since then, support for its leftist, anti-austerity platform has soared. It currently leads many opinion polls, thus breaking the bi-party grip the Socialists and governing Popular Party (PP) have had on Spanish politics for over three decades.

Much of the party's success is attributed to its leader, Pablo Iglesias, a 36-year-old, ponytailed political scientist with a talent for public speaking. Dressed in jeans and a windbreaker, he addressed the crowd in Madrid to loud cheers.

"Today we're not here to protest, we're here to say that the time has come," he said.

"Austerity policies have divided our country in two: those who have won and those who are worse off than before - it's those on top and those down below."

The party's fierce opposition to the austerity preached by Germany and the European authorities has aligned it with Syriza, the new governing party in Greece. Iglesias and Greek Prime Minister Alexis Tsipras have become close allies and in mid-January the Spaniard visited Athens to lend his support to the Syriza election campaign. Among the few concrete policies Podemos has announced is a proposed audit of the national debt, similar to Syriza's own plans. 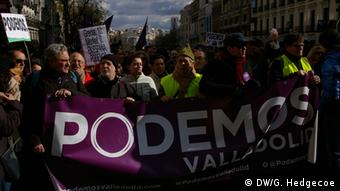 Tens of thousands joined the rally in central Madrid

"Who said that a government cannot change things?" Iglesias asked the Madrid crowd. "In Greece, they have done more in six days than other governments have done in years."

Syriza's election victory is seen as a boost to Podemos, and on Saturday Greek flags were visible among supporters of the Spanish party. One demonstrator bore a placard which read: "Greece 10, Angel Merkel 0."

Spain's economy may be over five times larger than that of Greece, but the two countries have been suffering similar problems. The eurozone economic crisis has been deeply damaging for both nations, reversing growth, sending public debt soaring and leading to austerity policies which have eroded the welfare state. In Greece's case all of those challenges have been more pronounced than in Spain. However, the Spanish jobless rate, at just under 24 percent, is close to that of Greece's 26 percent.

"I don't know if Greece will get better or worse [under Syriza], but we do know that we don't want what we have right now," said Miguel Ruiz, at the demonstration with his family.

"We need a change in general - a change in our society, a cultural change," said his wife, Gemma.

Spain has now returned to growth after its half-decade economic slump and the International Monetary Fund has forecast that its gross domestic product will increase by 2 percent in 2015. But despite Prime Minister Mariano Rajoy's insistence that the country is on the road to recovery, many Spaniards are unconvinced, especially with the jobless rate so high and austerity policies still in place.

In addition, the perceived mismanagement of the economic crisis and a glut of scandals have combined to undermine the credibility of many state institutions, from traditional political parties and the government, to banks and the royal family.

Madrid has seen the biggest show of support yet for anti-austerity party Podemos, with tens of thousands taking to the streets. The party's policies have drawn comparison with Greece's new left-wing government. (31.01.2015)

Reactions in Europe to the victory of anti-austerity party Syriza have suggested that Greece is on a "collision course" with the rest of the bloc. Eurozone finance ministers are to meet shortly. (26.01.2015)

For the last two years, the governing PP has been plagued by allegations that it ran an illegal cash fund financed by corporate bribes. Meanwhile, in late 2014, it emerged that 82 board members of the lenders Caja Madrid and Bankia had been given unregistered credit cards with which they had spent over 15 million euros ($16.9 million) on personal and luxury items. Other corruption scandals have hurt the Socialists in Andalusia and the Catalan nationalists of the Convergence and Union party.

"We're fed up at the lack of trustworthiness and the level of corruption among our politicians," said Javier Gonzalez, a 37-year-old engineer. "We're fed up with the establishment. It would be great if this [demonstration] worked to boost Podemos, but also as a wake-up call for the traditional parties."

With Podemos firmly focusing public debate on corruption, the party itself has been subjected to intense scrutiny. In recent days, critics have pointed to a 425,000-euro payment that Podemos co-founder Juan Carlos Monedero received from the governments of Venezuela, Bolivia, Ecuador and Nicaragua in 2013 for advisory work. The tax authorities are investigating whether the payment was made legally.

A year of upheaval

Such political tensions reflect the fact that Spain is going into a year of potentially major upheaval. Municipal and regional elections are scheduled for May, with a general election almost certain to take place by the end of the year.

"It's going to be an enormous year," said Josep Lobera, a sociologist at Madrid's Autonoma University.

"At a regional level this year is going to see an earthquake, because Podemos could end up governing a number of regions, in coalition or on its own," he said. In the general election, he added, the party will also be a contender.

"That is new. It means a break with the bi-party system for the first time in nearly 40 years," Lobera added.