Oscar Pistorius has been found guilty of manslaughter at a court in Pretoria. Judge Thokozile Masipa had previously cleared the paralympic athlete of more serious murder charges in his girlfriend Reeva Steenkamp's death. 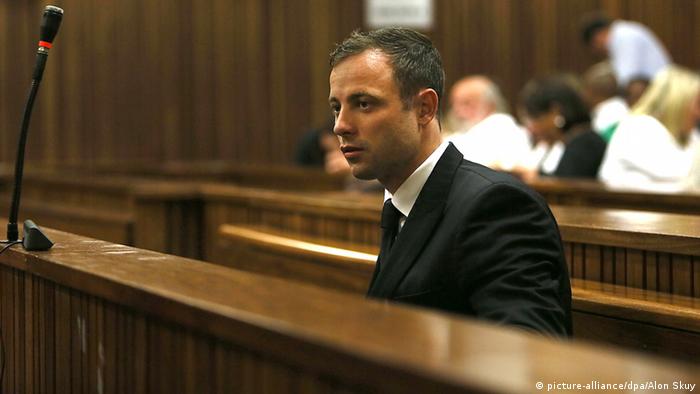 Judge Thokozile Masipa on Friday found Pistorius guilty of culpable homicide, South Africa's equivalent of manslaughter, a crime that can carry a maximum of 15 years in prison. He will be sentenced on October 13 and has been granted an extension of bail until then.

Judge Masipa on Friday said that, on the charge of murder "the accused is found not guilty and discharged, instead he is found guilty of culpable homicide."

Pistorius was on trial for shooting and killing his girlfriend, Reeva Steenkamp, through a closed bathroom door last February. Pistorius told the court that he believed an intruder had entered his home. He also said during the trial that he had aimed below chest height intentionally because he did not want the shots to be fatal. Steenkamp was sitting down in the bathroom, however.

"A reasonable person," judge Masipa countered, would have foreseen "that whoever was behind the door might be killed," adding Pistorius did not take steps to avoid this.

When he left the courthouse early on Friday afternoon, a large crowd of supporters greeted Pistorius, escorted by security, with cheering and screaming.

Lawyer: client not a flight risk

Pistorius was on trial on four charges - also including murder and gun counts. He was cleared of three counts and found guilty of one.

After Judge Masipa read her verdict, the court heard legal arguments from the defense and prosecution for and against Pistorius' extension of bail.

"There is no basis" to believe he would not stand his sentence, his defense lawyer said, referring to the risk of flight.

The defense also argued that Pistorius had sold his properties before the verdict to pay his legal fees. The prosecution, on the other hand, argued that this increased the risk of flight. The prosecution said it was possible that the property was sold so he could leave the country.

"The state has not proved beyond reasonable doubt that the accused is guilty of premeditated murder," Masipa said on Thursday to excuse Pistorius from the most serious charge. "There are just not enough facts to support such a finding."

The double-amputee Olympic sprinter shot his 29-year-old girlfriend, law-graduate and model Reeva Steenkamp, through a bathroom door in his home in Pretoria, South Africa, in the early hours of February 14 last year.