Like in previous editions, Singapore and Japan did well in the OECD's education assessment. The results also brought some surprises, however, related to gender and social equality. 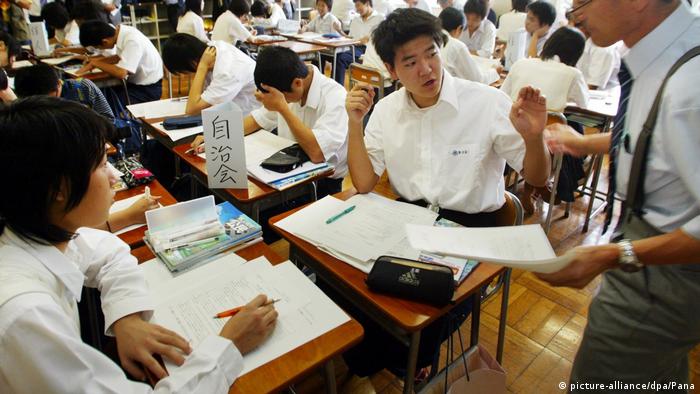 Students in Singapore outperform the rest of the world in all categories of the triennial PISA (Programme for International Student Assessment) survey. The Organization for Economic Cooperation and Development (OECD) released the results of the 2015 testing cycle on Tuesday and Singapore tops the list in all three main categories.

The top five countries in students' science performance are Singapore, Japan, Estonia, Taiwan and Finland. Singapore significantly increased its scores in science and reading comprehension compared to the last survey three years ago, while Finland's scores dropped significantly in the three main categories of science, reading and math. "Every country has room for improvement, even the top performers," OECD Secretary-General Angel Gurria said at a PISA launch event in London on Tuesday. "With high levels of youth unemployment, rising inequality, a significant gender gap, and an urgent need to boost inclusive growth in many countries, more must be done to ensure every child has the best education possible."

Subjects covered in PISA include science, math, reading comprehension and, as a more recent addition, collaborative problem solving. In the most recent survey, the main focus was on science. Around 540,000 15-year-old students in 72 countries participated in the test survey that's supposed to evaluate the quality, equity and efficiency of school systems. The first PISA test took place in 2000. While it is organized by the OECD, non-OECD countries, for example Algeria, Brazil, Russia, Peru and Thailand are among the participants as well. Participation is voluntary and all countries contribute questions. Students need to show they can transfer information they learned in class to different problems.

Germany is ranked 16th in science. Students in the country used to be divided in three branches according to their performance. In most German states there is still a division between those students that will go on to university and those whose academic performance isn't as high. "School must have high expectations of all students," Matthias Rumpf, the spokesman for the OECD's Berlin branch, told DW. "If some students are on a path where a lot is expected of them and others can merely do a little work, that doesn't work."

Gender equality not an indicator for performance

The PISA survey also looked at equity between boys and girls and between students of different social statuses. Between 2009 and 2015, boys' reading performance improved, particularly among the highest-achieving boys, while girls' reading performance deteriorated, particularly among the lowest-achieving girls. This development narrows the gender gap in reading, where girls are still doing better than boys on average.

Boys and girls do not have equal opportunities everywhere. In many countries, girls are still disadvantaged when it comes to education. That doesn't necessarily mean they miss out on school entirely, but could refer to how they're treated or graded by teachers, for example. In some of the countries that scored well in science, the state of gender equality is surprisingly bad. Both Japan and Finland score way below the OECD average when it comes to providing equal opportunities to male and female students.

Neighbors Algeria and Tunisia both didn't perform well in science, math and reading. But in Tunisia, the state of gender equality far exceeds the OECD average, while Algeria scores far below it. Tunisia is a champion for gender equality in the region. The country's new constitution, passed in 2014, became the first one in the Arab world to allow both men and women to run for President. The same is true for Western countries like France, Belgium and Germany, where the education level of parents still plays a large role in their children's educational career.

OECD spokesman Rumpf says that another decisive factor in education are the teachers.

And good teachers are the ones who come up with good ideas for how to bring information across in the classroom.

Says Rumpf: "As soon as students enjoy learning, they can achieve better results."