The ability of German teenagers to solve real-life problems could be better, a new global survey suggests. Performance in the computer-based assessments was, however, above the OECD average. 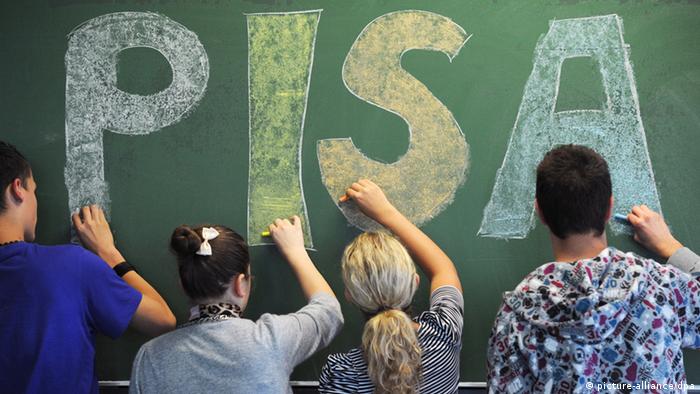 The global survey, the results of which were released on Tuesday, compare the problem-solving abilities of 15-year-old students against their performance in mathematics, reading and science.

The test, known as #link:http://www.oecd.org/pisa/:PISA# - the Programme for International Student Assessment - is run by the Organization for Economic Co-operation and Development (OECD) and conducted every three years. The latest results are from tests in 2012 in which 85,000 students from more than 40 member and non-member OECD nations took part.

The computer-conducted assessments are used to determine whether students close to finishing compulsory education can solve real-life problems, both in and out of the classroom - and whether they have gained the necessary skills at school to help them once they leave.

German students #link:http://www.oecd.org/germany/PISA-2012-PS-results-eng-GERMANY.pdf:performed above the OECD average#, and on par with other nations such as Austria, Belgium, the Czech Republic, Estonia, France, Italy, the Netherlands, the United Kingdom and the United States - but below Australia, Canada, Finland and most East Asian countries.

Some students fall short of baseline

The study also shows that one-in-five students in Germany is only able to solve very simple problems, meaning they do not reach the "baseline level of proficiency" in problem solving.

Students who were better at mathematics often also showed proficiency in problem-solving, with the authors suggesting that those students often attended German high schools that focus on academic learning.

"This may indicate that academically weaker students are not given sufficient opportunities to learn the skills needed to solve complex, real-life problems in contexts that they do not usually encounter at school," the authors say.

Within Germany, the results show boys scored significantly higher than girls in problem solving, while students with an immigrant background scored lower than non-immigrant students.

Singapore ranked top, followed by Korea and Japan. According to the results, Germany's ranking places it between spots 12 and 21, out of the 44 participating countries and economies.

The PISA results are closely scrunitized and used by countries to gauge the performance of their students, as well as policy makers to help set future education targets.

In Jordan, home schooling could be just what the education system needed 19.03.2021

While China has barred private tutoring for high school students during the weekend and vacation periods, in South Korea the private tuition industry is flourishing. Fabian Kretschmer reports from Beijing.