It was not a classic, but Dortmund get the win they need to close the gap on RB Leipzig to three points. Pierre-Emerick Aubameyang's hot streak continues as Ingolstadt rue missed chances and a penalty that never was. 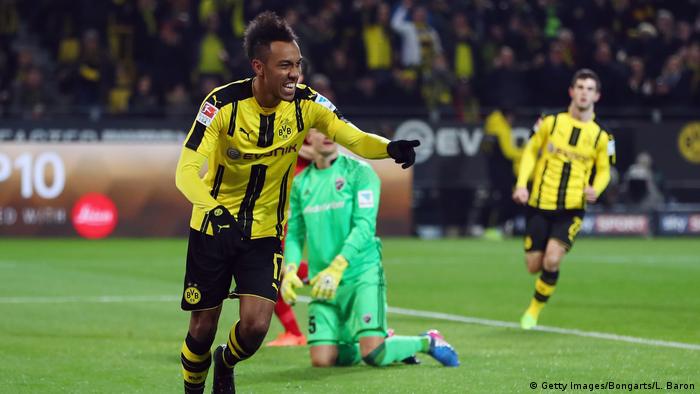 With Marco Reus and Mario Götze both sidelined and Ousmane Dembele serving a suspension, it’s good for Dortmund to know they have enough firepower to come through games like this, against an Ingolstadt side that defended well and were disciplined throughout.

Christian Pulisic got another start and Shinji Kagawa once again showed that he can once again be the player he was before his move away from the club.

But the main man for Dortmund was Aubameyang yet again. The Gabonese striker notched up another goal here – his 23rd of the season – which is the exact number of goals Dortmund’s opponents have clocked up all season.

The striker took his goal with all the assurance you’d expect of a player top of the Bundesliga scoring charts and with nine goals in his last five games. After good work by Marcel Schmelzer on the left, Aubameyang confidently prodded Schmelzer’s cross past Martin Hansen.

Dortmund were in complete control for the first half an hour and could have doubled their lead as chances came and went, but the longer Ingolstadt stayed in the match the more confident they became – and the Bundesliga’s second bottom team came out fighting at the start of the second half.

Less than two minutes after the restart Matthias Ginter let Mathew Leckie in and the forward only had Roman Bürki to beat, but the ball came off Leckie’s shin, going high and wide.

A few minutes later, the game’s most controversial moment came when Dario Lezcano was clearly swiped by Bürki, who took the striker clean out but somehow the home side were not punished with a penalty. It was a clear injustice that seemed to motivate Ingolstadt, who pushed hard for an equalizer.

But it never came, with the last kick of the game dropping to Leckie, the most wasteful player on the night for Ingolstadt, but the striker could only send his shot into the stand behind the goal.

The performance was not a memorable one for Dortmund, but the result was the perfect tonic for Thomas Tuchel’s side after last week’s defeat in Berlin.

Dortmund 1-0 Ingolstadt, as it happened:

Bundesliga: What to watch out for on Matchday 25

Matchday 25 presents an opportunity for a couple of teams that were prevously overperformers to steady the ship. Bayern Munich, meanwhile, could be in for an all-too rare serious test. (16.03.2017)

The two top goalscorers in the league continue to battle it out with smiles on their faces. There's hope at the bottom of the table, and a headache for one side near the top. Here are the Matchday 24 talking points. (11.03.2017)