Philippine citizens protest Duterte′s drug war on anniversary of dictatorship overthrow | Asia | An in-depth look at news from across the continent | DW | 25.02.2017

A rally has been held in Manila outside the cell of a senator who has been charged with drug trafficking offenses. Protesters warned of a return to conditions of the military dictatorship overthrown 31 years ago. 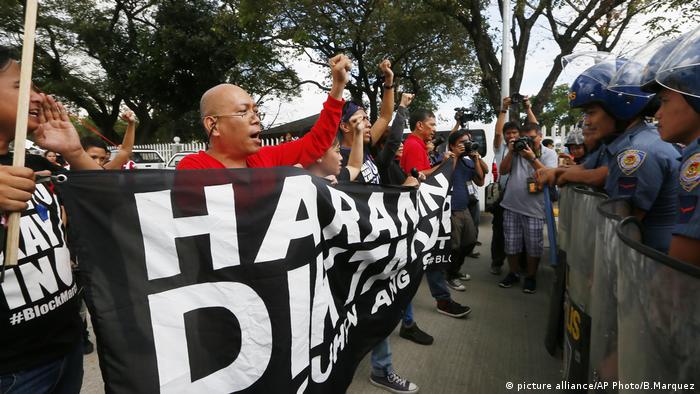 Thousands of people protested on Saturday against Philippine President Rodrigo Duterte's deadly war on drugs after the arrest of his most high-profile critic.

Duterte's political opponents and left-wing activists transformed a traditional celebration of a "People Power" uprising against dictatorship three decades ago in Manila into a protest march condemning his war on drugs.

The group warned that Duterte's authoritarian rule could return the country to a dictatorship, demanding an end to the extrajudicial killings that have claimed more than 7,700 lives in the past seven months.

The military-backed dictatorship of Ferdinand Marcos was toppled in a bloodless "People Power" revolution 31 years ago to the day.

"We are taking the matter seriously. We are warning our people about the threat of rising fascism," Bonifacio Ilagan, who led one of the protests, told news agency AFP. 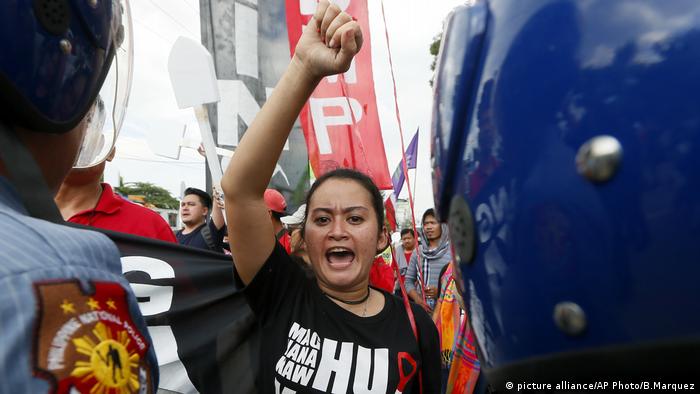 The protesters gathered outside the national police headquarters, where opposition figure Senator Leila de Lima was detained two days ago on charges that she took bribes from imprisoned drug traffickers.

"There is a president who is threatening to reimpose martial law and openly support the killings of thousands of people," de Lima said in a message from her detention cell a day after she was arrested.

"The grim truth: In the last seven months under Duterte, there were more deaths compared to the 14 years of martial law under the Marcos regime."

The former human rights commissioner said her arrest was an effort to silence her and an act of revenge for her decade-long efforts to expose Duterte as the leader of death squads during his time as mayor of the southern city of Davao.

"President Duterte is effectively expanding his drug war from the urban poor to the legislative branch of government," Phelim Kine, deputy Asia director at Human Rights Watch, said in a statement.

Protester Ilagan, a playwright who suffered horrific torture over two years in a police prison under Marcos' martial rule in the 1970s, cited to AFP the "culture of impunity" engendered by Duterte's anti-drug crackdown. More rallies in support of de Lima were organized for later in the evening.