To topple dictators like Syria’s Assad, the world community should not focus on false choice between accommodation and attack, writes Peter Ackerman. Instead it should teach what works: civil resistance. 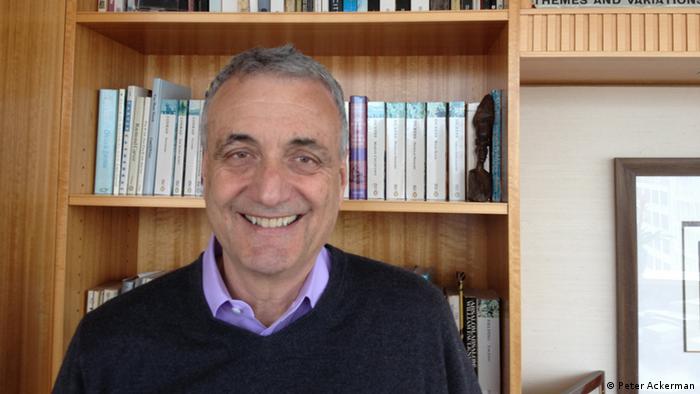 Peter Ackerman is the founding chair of the International Center on Nonviolent Conflict (ICNC), a board member of the Council on Foreign Relations and managing director of Rockport Capital, a private investment firm.

Since the Cold War, a rising proportion of the world's conflicts have been waged by ordinary citizens to dislodge authoritarian rulers. I believe this trend will continue. Conventional wisdom has said that oppressed people have two choices: either accept the status quo or mount a violent insurrection.

My dream is that the day will come when people in all parts of the world will turn to civil resistance rather than rely on armed revolt. And I hope they will make this choice because they will understand that civil resistance (also referred to as nonviolent conflict or "people power") is a more effective way to fight for their freedom.

A decade ago I founded the International Center on Nonviolent Conflict to impress on the world thought this reality: that civil resistance is "a force more powerful" than violent insurrection.

ICNC shares the practical knowledge of civil resistance with activists, scholars, journalists, and policymakers. Already this knowledge has assisted people who want to change their future in over 139 countries. The ultimate result will be to save countless lives otherwise at risk in violent uprisings.

As an example, just consider the effects of the two phases of the Syrian conflict: First, a campaign of civil resistance was waged from March to September 2011, during which the Assad regime was weakened more than at any other time over the previous 40 years - and fewer than 3,000 people died from its repression.

That campaign's success emboldened a large part of the Syrian military to defect, joining impatient activists to form the Free Syrian Army (FSA). Tragically, in the next phase of the conflict, civil resistance was marginalized because many falsely believed that "nonviolence doesn't work," and violence against the regime intensified.

Now, with 70,000 more fatalities and no end in sight to a war of mutual destruction, Assad's opponents have proved just the opposite - that violent insurrection doesn't work.

Historical proof that violent resistance is less effective comes from a study by leading scholars, whose research was supported by ICNC. The study compared the outcomes of 323 violent and nonviolent campaigns between 1900 and 2006.

The results were published in the 2011 book "Why Civil Resistance Works" by Erica Chenoweth and Maria Stephan, which won the Woodrow Wilson Award from the American Political Science Association for the "best book published in the U.S…on government, politics, or international affairs." It found that campaigns of civil resistance achieved their objectives 53 percent of the time versus a success rate of 26 percent for violent insurrections.

This data should not be surprising. Armed struggles aim to kill anyone in power without discrimination, but effective civil resistance distinguishes between the relatively few power-holders in a society and the larger coterie (bureaucrats, military, business) who obey those in power.

With tactics such as strikes, boycotts, and mass demonstrations, civil resistance spurs defections among those supporters and can force changes at the top. This strategy of dissolving an oppressor's capacity to use power is more likely to work against a well-armed dictatorship than a strategy of mutual annihilation.

Civil resistance is also more likely to produce a democratic outcome. A 2005 study that I co-authored, entitled "How Freedom is Won," identified civil resistance as a key factor driving 50 of the 67 transitions from authoritarianism between 1972 and 2005.

Of those 50 transitions, 32 (64 percent) resulted in governments with a high level of respect for rights and liberties. When oppositions engaged in violence, the chances of a democratic outcome dropped to 20 percent.

These facts compel us to understand why civil resistance is effective.

Most analysts argue that certain structural conditions which a movement can't control - such as a ruler's willingness to use repression, the degree of digital freedom, or whether the society has a middle class - determine the outcome.

My research and that of others have found that there is no correlation between such conditions and the outcomes of nonviolent conflicts. Just the opposite: a movement's choices - its strategy, messages, discipline, tactics, coalition-building, and other actions - are far more influential than the perceived initial impediments.

During the Arab Spring, contrary to the expectations of experts who are focused on the behavior of elites, ordinary Tunisians and Egyptians ousted Zine al-Abidine Ben Ali and Hosni Mubarak using nonviolent tactics.

Since I wrote my doctoral dissertation on this subject 35 years ago, I've witnessed dozens of breakthroughs by home-grown, nonviolent movements organized by people who refused to tolerate repression any longer. Many times I've seen how an organized, disciplined movement can develop strategies of mass resistance to put intolerable pressure on brutal power-holders and dissolve their legitimacy.

The international community must stop being mesmerized by the false choice of accommodating or attacking tyrants and should pay attention to history's verdict:

The very people who are oppressed, if they know how to use civil resistance, can win their rights through their own initiative. The violence they have feared does not require violence to end it. The freedom they crave, they can have - if we help them obtain the knowledge of how to do so.

Our activists views on civil society

What are the responsibilities of the civil society in a democratic system? Is co-determination just a rhetorical term or a realistic chance for the democratic process? Our activists share their opinions. (31.05.2013)

Power to the people: Have your say

What is the essence of democracy? Should each country strive for its own democratic reforms? What role does the West play in initiating political change? Share your opinions with us and find out what others say. (13.05.2013)