Peruvians march against Keiko Fujimori, whose father's reign was filled with abuses

It is probably no coincidence that the country with the highest COVID mortality rate per capita in the world is also afflicted with the virus of political polarization.

Pedro Castillo and Keiko Fujimori did not even win a third of the votes in the first round of the presidential election. Many think that they are the worst candidates Peru has seen since becoming independent 200 years ago.

Yet, one of them is about to become president. It will either be Castillo, a socialist primary school teacher with no experience of government, or Fujimori, the neoliberal daughter of the detained former authoritarian president Alberto Fujimori, who faces 30 years in jail on charges of corruption and human rights abuses.

Socialism versus capitalism, country versus the city, for many in Peru the choice they face makes no difference, either plague or cholera. But in this pandemic, many seem to be seeking simple answers to complex questions. At the moment, Castillo seems to have the better answers for a slight majority.

"If nothing extraordinary happens in the next few days and the polls are right, Castillo will win because he presents himself perfectly as the voice of dissatisfied people," the political analyst Mayte Dongo said. "The pandemic has caused poverty to increase rapidly in Peru. He is saying symbolically: 'As a teacher, I know what it means to scrape the last bits from the pot so that my family has something to eat.'" 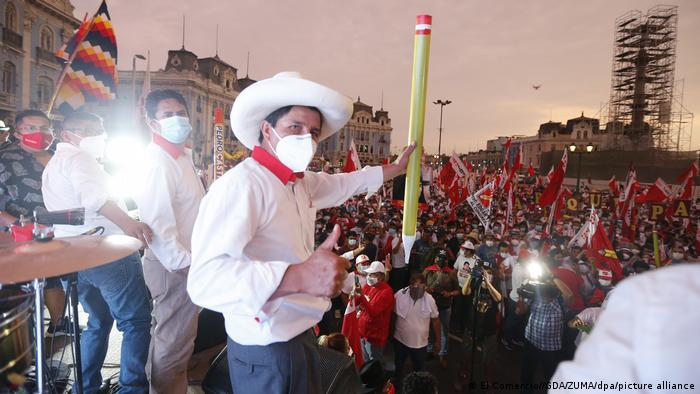 His opponents have raised the specter of Venezuela to discredit the Marxist-Leninist agenda of his Peru Libre (Free Peru) party, which has stated its intent to abolish the Constitutional Court, tighten control of the media, and nationalize the oil and gas industry with a view toward creating a socialist state.

Dongo does not entirely agree with the characterization: "Castillo does not have the support of the people the way Hugo Chavez did at the peak of his time in Venezuela, and he does not have a majority in Congress either. Furthermore, Peru is in a deep crisis and Castillo will therefore not have the means to push his agenda through. He knows that he will not be able to govern with such a radical course."

Several killed in attack ahead of presidential vote in Peru

For her part, Fujimori, who is making her third attempt for the presidency, is very open about wanting to fill her father's old shoes. Alberto Fujimori was in power from 1990 to 2000, during which he forced tens of thousands of indigenous women to be sterilized. He is currently serving a 25-year sentence for authorizing death squad killings and kidnappings.

Fujimori has said she would pardon her father if she wins, hailing a return to a time that many Peruvians do not want. "Fujimori has announced that […] she will introduce a 'demodura' or 'hard democracy', authoritarian government with democratic institutions, exactly what her father did,' explained Dongo.

Her Fuerza Popular campaign team knows that it is important to talk about the present, too. "Many of them talk just like Brazilian President Bolsonaro," Dongo said. "They questioned the efficacy of vaccines and actually the whole pandemic overall." 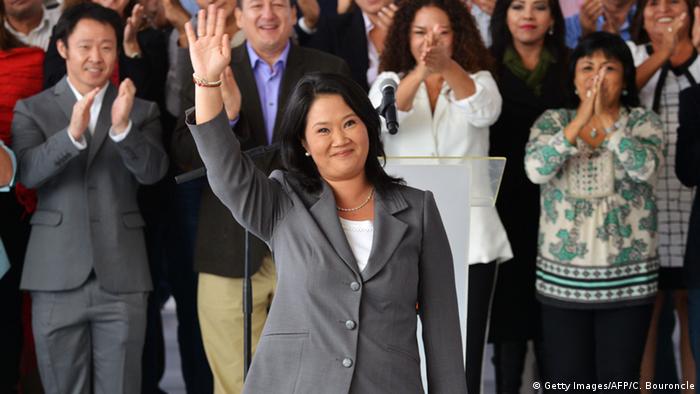 Keiko Fujimori has already made two attempts to win the presidency

In a television debate on Sunday that went on for three hours, Castillo and Fujimori did their best to win over undecided voters. "It was all very heavy-handed," commented political scientist Kathy Zegarra. "The duel will not be remembered like some debates of the past. At least one could tell that Fujimori had some political experience, but Castillo seemed a little confused."

On Sunday, she said, Peru's 25 million voters face the choice of radical change or "more of the same."

"For 30 years, we've been living with a streamlined and inefficient state that has shown its ugly face during the pandemic," Zegarra said. "Part of the economic model was to push people into informal jobs."

It was the people in informal jobs who were the first to lose them at the beginning of the pandemic, and, as they had little access to the health system, they were also the first to fall victim to the coronavirus. "The pandemic has revealed the disadvantages of this economic system mercilessly. Castillo's supporters want a change whereas Fujimori wants this model to be continued, alongside a few small aid programs," Zegarra said.

It would soon become clear whether Fujimorismo still has a chance in Peru, she said:  "Some of the population idolize Alberto and Keiko, while others hate them. There is even an anti-Fujimorismo movement." 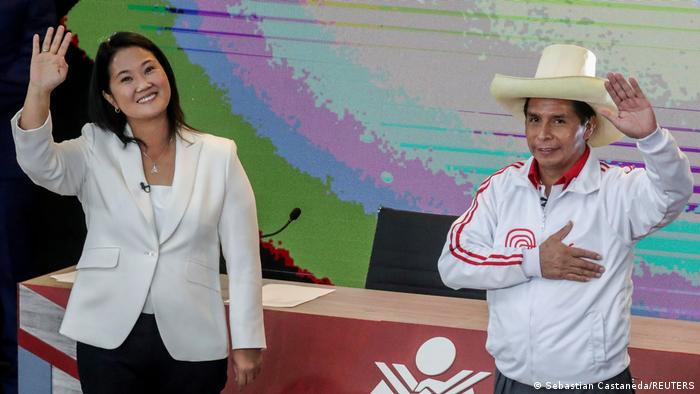 The TV debate between the candidates lasted over three hours

The rich quarters of the Peruvian capital Lima seem to have made their choice. There are posters everywhere warning against the specter of communism. "Peru is not Venezuela nor Cuba," one reads. "We refuse to have our freedom taken away," another says.

Peru: Over a dozen killed in attack ahead of presidential vote

Over a dozen people were killed at two bars in attacks carried out by suspected Shining Path rebels. Pamphlets warning people not to take part in the 2021 election were left at the scene.

Peru has released new statistics showing that its COVID deaths number well over double the original figure given. And the pandemic holds sway over the rest of the continent as well.

The former Peruvian leader has been serving a jail sentence since 2007 for human rights violations. The court reinstated a "humanitarian pardon" on health grounds first announced in 2017 but revoked within a year.

Socialist Pedro Castillo is declared the next president of Peru. His right-wing rival Keiko Fujimori conceded after spending a month challenging the results in court. Castillo roused the poor and underprivileged with a radical promise to 'end poverty.'