Keiko Fujimori, facing an election loss and possible jail sentence, has continued her claims of electoral fraud. A new judge has joined the electoral panel to restart the review of the vote. 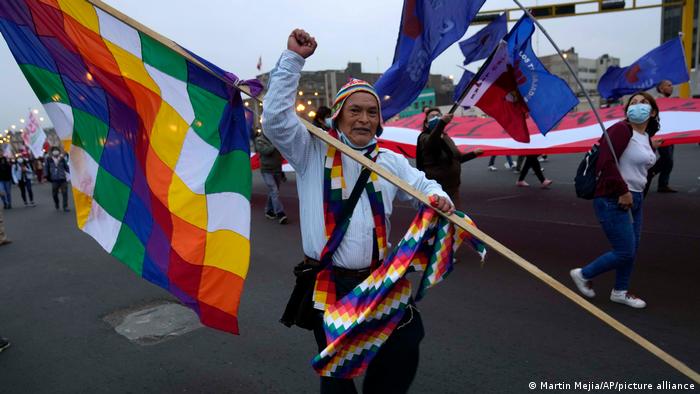 Peru's presidential election has polarized the country, especially between the rural poor and the urban elites

Supporters of both leftist candidate Pedro Castillo and right-wing rival Keiko Fujimori took to the streets on Saturday, with the country still awaiting the official results of the June 6 presidential election.

The results have been delayed by claims from the Fujimori camp of electoral fraud. Castillo holds a slight lead of around 44,000 votes, according to unofficial data.

The National Jury of Elections (JNE), the official body in charge of the final result, was able to continue its work on Saturday after the appointment of a new judge to the panel.

The right-wing candidate — who is facing possible jail time on corruption charges if she fails to win — has not provided any evidence for her claims. Castillo's Free Peru party has rejected the allegations and the US State Department has called the electoral process a "model of democracy."

One of the JNE's four judges — Luis Arce — stood down on Wednesday, saying he "declined" to carry on performing his duties. His replacement, Victor Raul Rodriguez, was sworn in on Saturday.

The JNE has faced increased pressure from Fujimori supporters amid the tense political situation. Pro-Fujimori protests have taken place outside the house of the leading JNE official, Luis Salas.

The discovery of an audio recording by the imprisoned former intelligence chief, Vladimiro Montesinos, who served under scandal-ridden ex-president Alberto Fujimori — Keiko's father — led to an outcry earlier in the week.

In the recording, Montesinos advised that the Fujimori camp should pay off three of the four JNE judges so that they call the election for the right-wing candidate.

Castillo's supporters also marched to the JNE headquarters in Lima on Saturday, demanding the confirmation of the unofficial results.

Pro-Fujimori counterprotesters gathered a few blocks away with banners repeating the claims of electoral fraud and saying "no to communism" — an accusation often leveled at Castillo.

"We are not Chavistas, we are not communists, we are not going to take away property from anyone, that is false... we are democratic," Castillo told supporters on Saturday night. "The differences, the inequalities, are over."