Although all votes have been counted, Pedro Castillo's right-wing rival, Keiko Fujimori, has called on some ballots to be annulled, claiming fraud. 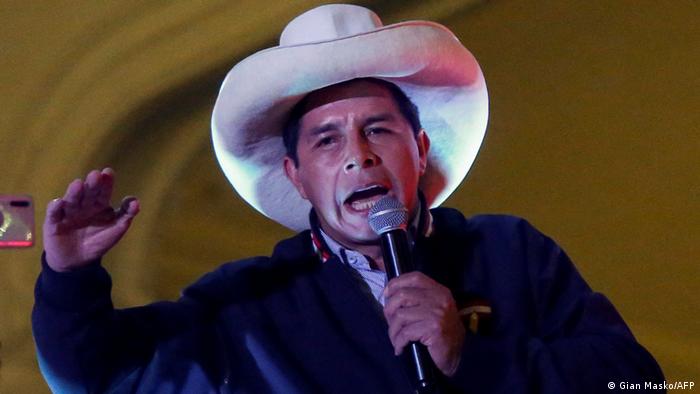 Leftist Pedro Castillo has declared himself Peru's next president, although the final electoral outcome is uncertain

Although the count has been completed, the result has not been officially announced by election authorities. Nevertheless, Castillo thanked his supporters on Twitter.

"A new time has begun," Castillo said in a tweet thanking his supporters. "Millions of Peruvians have stood up in defense of their dignity and justice."

However, Fujimori has cried fraud in the election, and called on the JNE election jury to annul thousands of ballots, which could shift the results in her favor. The JNE jury is tasked with calling the final winner.

Fujimori told supporters in Lima on Tuesday that she would keep fighting and "defend Peru's democracy."

"Today a result has come out ... a result from the ONPE count, but the most important thing is the evaluation of the ballot boxes," Fujimori told rally-goers. "We trust the authorities, yes, but we trust more in the popular will."

Some prominent Fujimori supporters have even called for new elections to be held.

Castillo's Free Peru Party has shot down the fraud allegations, with Castillo's running mate for vice president, Dina Boluarte, saying the call for new elections is an attempt to "generate violence."

What's at stake in this election?

The disputes over the election results could take days or even weeks to fully resolve.

If Fujimori does not win the election, she could face trial on corruption charges. She is accused of taking campaign funds for previous presidential bids from controversial Brazilian construction firm Odebrecht. If convicted, Fujimori could spend 30 years in prison.

Castillo was born to two illiterate peasants in rural Peru, while Fujimori is the daughter of imprisoned former President Alberto Fujimori, who governed the country from 1990 to 2000.

Socialist Pedro Castillo is declared the next president of Peru. His right-wing rival Keiko Fujimori conceded after spending a month challenging the results in court. Castillo roused the poor and underprivileged with a radical promise to 'end poverty.'