Peru declares state of emergency over mine protests

The Andean country Peru has declared a state of emergency after clashes between police and protesters left three dead and 15 injured. The clashes were prompted by Peruvians protesting a new Chinese copper mining project. 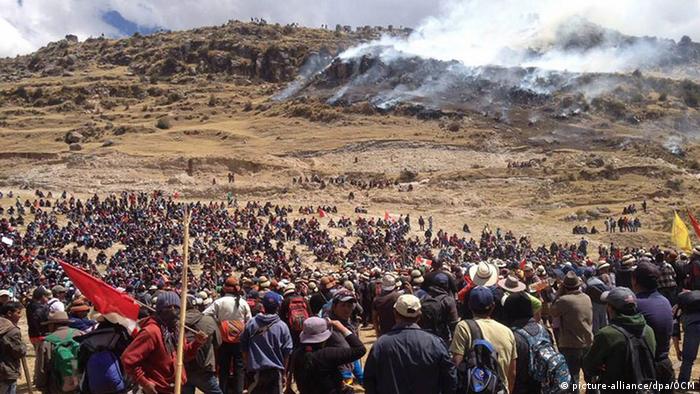 On Monday night local time, Peruvian police clashed with locals protesting the construction of a large copper mine, leaving three dead and 15 injured, including eight police.

In response to the clashes, the Peruvian government on Tuesday issued a state of emergency in six provinces.

The government order suspends the right to freedom of assembly, inviolability of the home and freedom of movement.

The national police will be supported by the armed forces in maintaining the country's internal order and protecting public services, according to the state of emergency declaration.

Peruvian President Ollanta Humala said on Twitter that he regretted the "loss of lives," adding that his government was doing its best to serve the area's population.

The copper mining project has been a point of contention between the Chinese consortium MMG and locals, who say the company modified its previously rejected environmental impact study.

The protesters believe that the mining project - expected to be Peru's largest when it becomes fully operational in 2016 - will contaminate crops and the local water supply.

Peru is one of the largest producers of copper in the world, and is expected to double output by 2016.

Scuffles broke out between protesters and police in Belgrade and Novi Sad while organizers said several activists had been detained. Activists argue new laws are damaging to the environment.

Demand for key metals is booming. Geopolitical realities and pandemic-related supply chain issues are increasing the pressure on EU countries to proceed with mining activities of their own to decarbonize their economies.