Peer Steinbrück aims at being chancellor | Germany | News and in-depth reporting from Berlin and beyond | DW | 02.09.2013

Germany's Social Democrat candidate in the upcoming elections is intelligent, a brilliant speaker, and an expert on finance. The opinion polls are against him, but Peer Steinbrück still believes he can win. 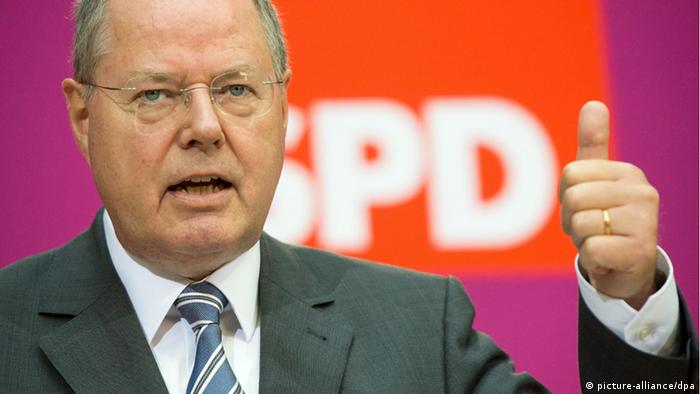 Now 66, Peer Steinbrück is an economics graduate from Hamburg who, despite an unpromising start, went on to become German Minister of Finance. As a schoolboy his math results were poor; he even had to repeat two years before passing his school exam.

Schmidt's recommendation, however, was based on the way Steinbrück used his economics degree to work his way up through the ranks: from chancellery aide (1978-1981, under Schmidt) via positions in various government agencies and ministries, to state premier of North Rhine-Westphalia, and eventually to a federal minister post. 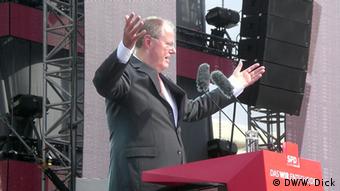 Peer Steinbrück has a reputation as a good orator

In 2005, Steinbrück lost the state premiership to the Christian Democrats (CDU). National elections followed a few months later, resulting in a grand coalition between the conservative CDU/CSU and the Social Democrats (SPD). Angela Merkel fought hard for the chancellorship, and as part of the coalition negotiations the SPD recommended that Peer Steinbrück should be finance minister.

Steinbrück and Merkel had a close working relationship. When the economic crisis came to a head in 2009, people threatened to storm the German banks and withdraw all their savings. Merkel and Steinbrück saved the day with an impressive joint appearance, reassuring the public that their money was safe.

However, Steinbrück also championed many financial instruments before the crisis that were later to prove controversial, such as the practice of property investors packaging bad loans and selling them.

Steinbrück's style tends to be described as rough, didactic and not very diplomatic. He is often very direct and says exactly what he thinks. His choice of phrase when he threatened to "send in the cavalry against Switzerland" over its refusal to share data on tax evasion, for example, caused quite a diplomatic flurry. He likes to see himself as someone who gets things done, but a side-effect of this, according to colleagues, is that he can be very impatient. 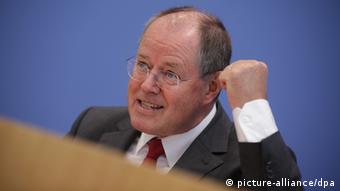 Steinbrück can come across as brusque and undiplomatic

While still premier of North Rhine-Westphalia, Steinbrück was a supporter of the so-called "Agenda 2010." These were the drastic reforms with which then- Chancellor and SPD leader Gerhard Schröder, aimed to transform the labor market and lower unemployment levels. Reductions in state benefits and requirements for people to take on greater personal responsibility in the event of unemployment were supported by measures that extended the low-wage sector and made it easier for companies to employ people on a temporary or limited contract basis.

The reforms were passed and Germany did indeed experience a kind of employment miracle - for which the subsequent Merkel government has taken much of the credit. The reforms have not, however, helped Steinbrück in the popularity stakes. Many employers did take advantage of the new regulations, and the dark side of the employment statistic is that around 20 percent of all employees in Germany now earn barely enough to live on.

Steinbrück now acknowledges that "something went decidedly wrong." He has warned that "society is threatening to drift apart," and says he wants to act swiftly to do something about it. He is promoting a social market economy that will put the focus back on the common good. However, critics say his political about-face, which includes his sudden espousal of social causes like a national minimum wage, is not believable.

Steinbrück is from a well-to-do family and can come across as elitist, which observers say is one reason why his pronouncements lack credibility with the public. But there is also another reason.

Bad start to the campaign 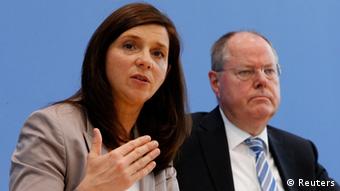 The SPD candidate (r.) would ideally want to form a coalition with the Greens

In the 2009 election, the CDU/CSU and the free-market liberal party, the FDP, got enough votes for Angela Merkel to govern without the Social Democrats. Peer Steinbrück became an ordinary member of parliament again, and announced his withdrawal from high-level politics. He wrote a successful book about his time in government, accepted honorary professorships at universities, and commanded high fees as a guest speaker. It appeared that he had no intention of returning to high office.

However, in December 2012 an extraordinary national convention of the SPD elected Steinbrück as its candidate for chancellor with almost 94 percent of the vote. The media then publicized the fact that Steinbrück had earned more than one million euros from speeches and as a financial adviser to banks and businesses. Although he did eventually disclose the details of his earnings, Steinbrück made the mistake of initially insisting that his earnings were a purely private matter.

He subsequently made some other misguided remarks, such as criticizing the chancellor's salary as too low and commenting that he never bought cheap wine, which for a while earned him the nickname "Calamity Peer." Comments like this badly compromised his desired image as the SPD leader fighting for the ordinary man on the street. 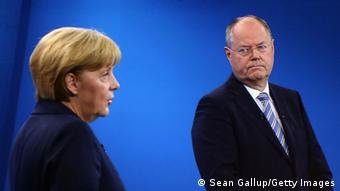 Current polls suggest that Angela Merkel's lead is unbeatable, but Peer Steinbrück isn't letting that discourage him. "Things looked worse than this for the SPD before the 2005 election, and then they turned out better," he says. In recent weeks he has been focusing on promoting his election manifesto. He proposes raising taxes for people on high incomes, in order to address Germany's social problems and support those in difficulty "who want to achieve something."

Above all, Steinbrück wants to improve the lot of working women, by ensuring that they are paid as well as their male colleagues, have better access to childcare, and improved pension schemes.

Steinbrück's supporters believe his trump card is authenticity. The SPD candidate has been married for 38 years to Gertrud, a teacher, and has three grown-up children. He's as reliable as a politician as he is in his private life, his supporters say.

He is looking to the Greens as a possible coalition partner rather than former ally Angela Merkel and her party, claiming that these days Merkel is simply "administering" Germany rather than shaping its future.

On Sunday night (01.09.2013), the two main chancellor candidates presented their policies in a debate live on national television that was watched by around 12 million viewers. The result appears to have been a draw, with pollsters giving neither candidate the edge.

Chancellor Angela Merkel faced challenger Peer Steinbrück in their only TV debate before German elections. The winner remains unclear. Analysts and pollsters say the debate will have only a marginal effect on the vote. (02.09.2013)

Content-wise, the TV duel between the SPD's Peer Steinbrück and Chancellor Angela Merkel didn't have much new to offer. But, as DW's Kay-Alexander Scholz writes, it became clear how the different parties view the issues. (02.09.2013)

The man seeking to replace Chancellor Angela Merkel after next month's election has unveiled plans for swift change. However, polls suggest there is little chance Peer Steinbrück will get to put his plans into action. (29.08.2013)