Chancellor Angela Merkel faced challenger Peer Steinbrück in their only TV debate before German elections. The winner remains unclear. Analysts and pollsters say the debate will have only a marginal effect on the vote. 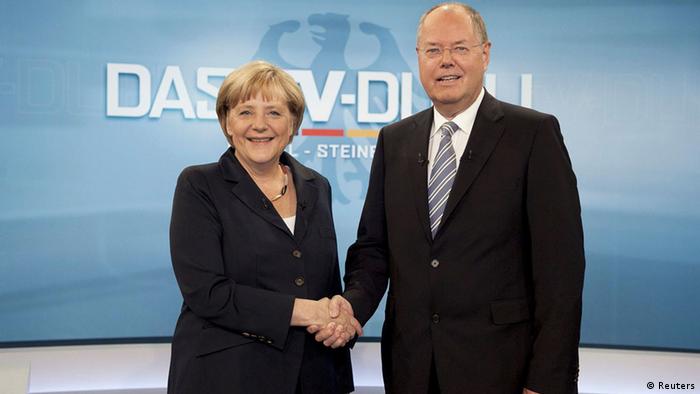 Just a half hour after the end of the TV "duel," as it's being called in Germany, it was already clear who had won. Not only were several opinion pollsters busily interviewing over 1,000 viewers, Deutsche Welle had two experts watching the two politicians' performance. Jörg Abromeit is a rhetoric trainer and head of a rhetoric academy in Bonn. Jürgen W. Falter, a professor of political science at the University of Mainz, has been watching elections for 40 years.

Both the experts agreed that Chancellor Angela Merkel's Social Democratic challenger, Peer Steinbrück, had done surprisingly well in the debate on Sunday evening (01.09.2013). He'd attacked well and managed to hold his customarily sharp manner under control. That would have gone down well with the voters.

"Steinbrück was able to take advantage of Angela Merkel's long-winded, rather presidential style," said Falter. Steinbrück got straight to the point of the questions so quickly that he used much less of his allowed speaking time than Merkel did. That gave him the chance to take up follow-up questions.

According to Abromeit, "Merkel was very edgy and tense at the beginning. But in the last half-hour, she was able to play on her premium as incumbent chancellor."

Steinbrück wins this round 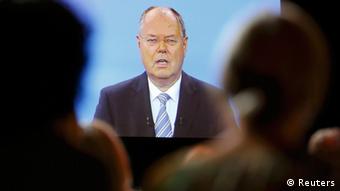 Opinion polls have confirmed the experts' impression. One pollster, infratest dimap, found that Steinbrück scored points due to his willingness to attack and argumentation. At the start of the debate, Steinbrück asked the viewers not to let themselves be "lulled" by the chancellor. There are many things wrong with the social system, he argued, but the chancellor and her government had failed to deal with many of them. Steinbrück listed promised reforms of the tax, health and elderly care systems that have failed to materialize.

"With Chancellor Merkel," he said, "there are a lot of bright, empty boxes in the shop window."

Steinbrück, for example, insisted on following up on one question so that he could push Merkel into committing herself to rejecting a freeway toll for cars. When asked how we would reduce rising electricity prices, his answer was clear.

"I won't promise anything I can't keep," he said, with seemingly more conviction than Merkel.

Sixty percent of viewers, infratest dimap said, felt Steinbrück had done better than they expected. Falter says that, in his experience, the main thing is how the candidates appear in the eyes of undecided voters. 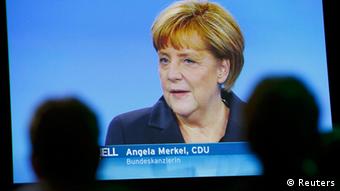 On the other hand, Merkel seemed friendlier and more competent. She scored four percent more than Steinbrück in that category, according to infratest dimap, while another pollster, Forsa, put her one percent ahead of Steinbrück overall. Both say that Merkel appeared more competent because of the results of her negotiations at the international level, such as an agreement to prevent international tax evasion at the G-20 summit.

She agreed with Steinbrück that Germany should not join any military action related to Syria - but that the country should have a clear response to the use of chemical weapons there. She admitted openly that she was happy with the work of the grand coalition, which she led between 2005 and 2009 with the Social Democrats as her junior partner. She even went a step further, praising the labor market reforms made by the Social Democrat government preceding her own between 1998 and 2005.

"[The then-chancellor] Gerhard Schröder deserves gratitude for what he did for our country," she said.

"It's very hard to defend oneself against Merkel's conciliatory, embracing strategy," said rhetoric strategist Abromeit. "That wins her lots of sympathy."

Falter, on the other hand, notes that Merkel speaks too often about the extent of her achievements. She repeatedly asks the Germans not to paint too gloomy a picture of the country. Falter generally sees the arguments made by both candidates as firmly divided.

Where Merkel can rightly highlight low unemployment figures and a booming economy, Steinbrück can also rightly point to the millions of workers who can't survive on their low wages. 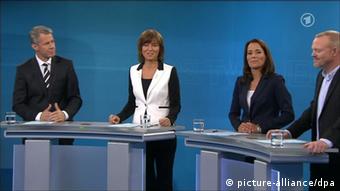 "In the end, most people decide the way they're always inclined to decide," Falter said.

They'll vote for the party they always prefer, he says, and those who haven't yet made up their minds are unlikely to be moved much by the debate: "The gap between the parties might become slightly smaller. That's all."

Abromeit's summary is more pointed. "Steinbrück's rhetoric was better," he said, "but Merkel will remain chancellor."

Falter feels that only something big, something from outside, could change that.

Both experts agree with polls showing no real desire for change in Germany. Forty-one percent of viewers, the polls found, have had their view of the two candidates confirmed; another 47 percent have not changed their voting intentions. Only 10 percent say they've changed their view.

And that points to a major aspect of the current mood. Most voters want exactly what both Merkel and Steinbrück say they don't want: a grand coalition of Christian Democrats and Social Democrats.

The election is on September 22.

Few would have predicted a political future for Angela Merkel who, many think, has little charisma and few skills to make it in the media age. In September, she'll be running for a third term as German chancellor. (29.08.2013)

Germany's Social Democrat candidate in the upcoming elections is intelligent, a brilliant speaker, and an expert on finance. The opinion polls are against him, but Peer Steinbrück still believes he can win. (02.09.2013)

Will Angela Merkel or Peer Steinbrück win the race? Although the two top candidates are in the media spotlight, German elections are all about political parties rather than individuals. (19.08.2013)

Merkel and Steinbrück face off in TV debate