Japanese Prime Minister Shinzo Abe will honor the "souls of those who died in the war" with US President Barack Obama in Pearl Harbor. However, he would offer no apology for the WWII attack, Abe's office said. 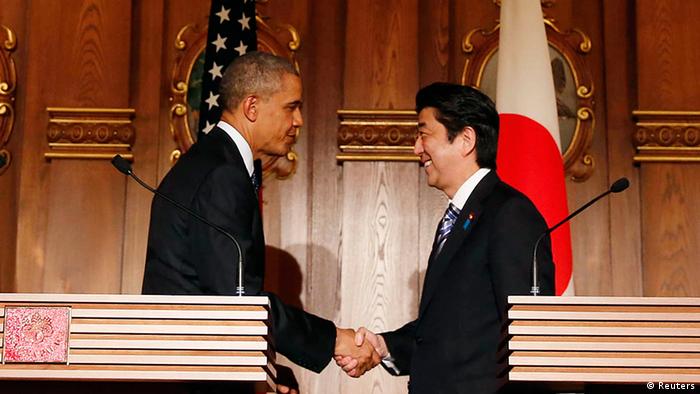 Japan's Shinzo Abe has said he will visit Pearl Harbor with US President Obama during a trip later this month. Abe will be the first serving prime minister to visit the US Naval base that was attacked by Japan in 1941. (05.12.2016)

President Obama has laid a wreath at a memorial in Hiroshima, paying tribute to the victims of the world's first nuclear attack. He has also called for fewer nuclear weapons, but did not apologize for the bombing. (27.05.2016)

Abe is set to join Obama in Hawaii on December 26 and 27, several weeks after the 75th anniversary of the surprise bombing on December 7, 1941. By doing so, the prime minister would become the first Japanese leader to visit Pearl Harbor.

The symbolic move has sparked speculation that Abe might officially apologize for the attack that killed 2,400 US servicemen and dragged the US into World War II. Abe's cabinet secretary, Yoshihide Suga, denied the rumors on Tuesday.

Also, the two-day summit would present an opportunity "to demonstrate to future generations our resolve not to repeat the horror and suffering of war as well as an opportunity to showcase the reconciliation between Japan and the United States," the spokesman added.

Observers believe that the diplomatic visit is also aimed at Japan's rival China, underscoring the close ties between Tokyo and Washington before Obama leaves office. His successor, Donald Trump, has criticized Tokyo during the campaign for not paying the US enough for defense. He also said that Washington must always be "prepared to walk" away from the decades-old alliance.

Earlier this year, Obama  became the first sitting president to visit Hiroshima and pay his respects to victims killed after the US dropped an atomic bomb on the city in 1945. However, he did not apologize for using nuclear arms.

The US occupied Japan after its defeat in 1945, but the two countries have since forged very close ties and present a united front against the potential threats of China and North Korea. Japan still hosts a number of US military bases with some 54,000 troops and pays $1.7 billion (1.58 billion euros) a year for their support.